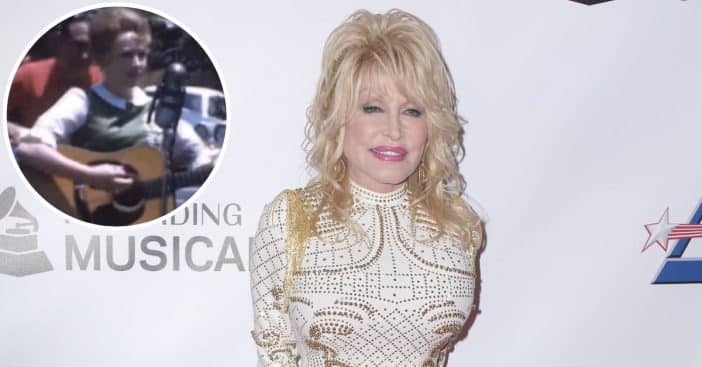 Life occurs in phases, and everyone has their past. Obviously celebrities are not immune to this, and most times, when fans come across their throwback pictures or videos, it gives them a nostalgic feeling. As a result, they have a better mental picture of the artist and appreciate their art even more

Recently, archivist Bradley Reeves was featured on WBIR in Knoxville, where he revealed some newly-uncovered 1961 footage showcasing Dolly Parton in her teen years. Back then, the 14-year-old was just an aspiring singer performing in a gas station parking lot.

The legend’s talent for songwriting and music was discovered at a young age by her uncle, Bill Owens, who stepped in as a manager figure during her childhood days. Bill bought her her first guitar and took her to local radio shows, hoping some of them would let Dolly perform. Luckily, she got a chance to audition on one of those shows — as it turns out, Tennessee businessman and politician Cas Walker bought some radio time and had started the Farm and Home Hour.

After her performance, Parton walked up to Walker and told him she wanted to work for him. He was thrilled and responded positively to her request, which marked the beginning of her career. “Well,” Cas replied, “then you’ve got a job, because you’re the only person that ever said they would ‘work.'”

The newly-discovered video was captured over five decades ago by Haroldine Worthington using a silent 8-mm home movie camera. It shows the country music star tuning and strumming a guitar in a gas station parking lot in Fountain City, Tennessee, at an event sponsored by Cas Walker.

The clip is followed by a studio recording of the megastar singing “Make Believe,” a country music song written by Jimmy Work, after which Kitty Wells recorded a chart-topping version in 1955.  The song is one of the all-time greatest country music songs and has been covered by scores of artists, such as Loretta Lynn and Conway Twitty, Johnny Cash, Emmylou Harris, and Merle Haggard. Dolly Parton’s version of the song was included on Hits Made Famous by Country Queens, her 1963 compilation album with Faye Tucker.

Interestingly, well-wishers and fans are intrigued that the video has survived these long decades; however, it’s even more heartwarming to see a young Dolly Parton with the big hair and distinct voice just playing country music in a filling station without knowing what the future holds for her or the legend she would go on to become.

Click for next Article
Previous article: Why John Lennon Refused To Listen To His Own Music
Next Post: Julia Roberts And George Clooney Say Their Kiss In ‘Ticket To Paradise’ Took ‘80 Takes’