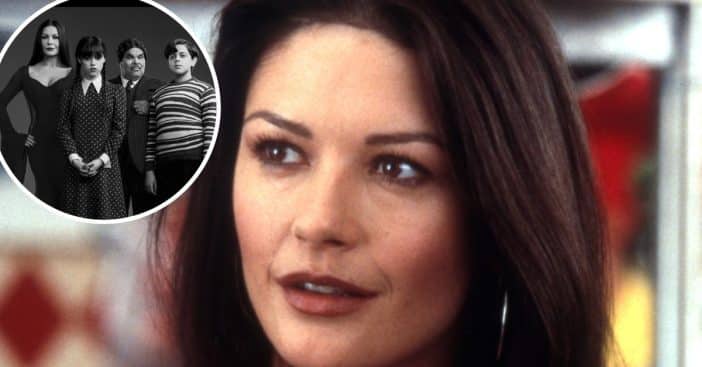 Wednesday is coming this fall! The new Addams Family series focusing on daughter Wednesday Addams is premiering on Netflix very soon. The first trailer for the series has arrived and we get to see Catherine Zeta-Jones as matriarch Morticia Addams.

A photo of the family including Catherine as Morticia, Jenna Ortega as Wednesday, Luis Guzmán as Gomez Addams, and Isaac Ordonez as Pugsley has also arrived and fans are geeked about the new Tim Burton series.

Miles Millar and Alfred Gough co-created the series which follows Wednesday as she attends the Nevermore Academy boarding school, where her parents once met. Alfred opened up about the series and shared, “The relationship that kind of hangs over the season is really Wednesday’s relationship with Morticia. How do you step out of the shadow of a mother as glamorous as Morticia?”

Miles added, “Every family is weird, and this one happens to be extremely weird, but they love each other. And that’s ultimately what it’s about: They always have each other’s backs, and it’s unconditional love.”

The show will reportedly involve a mystery with a number of murders. A Netflix synopsis shared, “Wednesday attempts to master her emerging psychic ability, thwart a monstrous killing spree that has terrorized the local town, and solve the supernatural mystery that embroiled her parents 25 years ago — all while navigating her new and very tangled relationships at Nevermore.”

Check out the trailer below:

Click for next Article
Previous article: Demi Moore Is Soaking Up The Last Days Of Summer In A Hot Pink Bikini
Next Post: Michael Strahan’s Invitation To Hang Out Gets Turned Down On Live TV