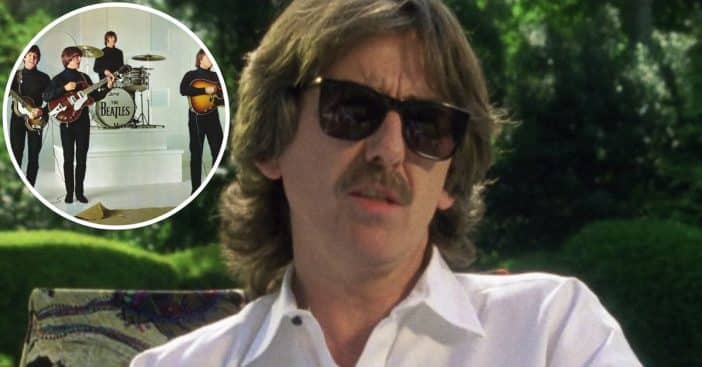 John Lennon disclosed that his fellow bandmate in The Beatles, George Harrison, actually provided one of the most famous lines of their song “Eleanor Rigby,” from the 1966 album Revolver. Citing other contributors to the track, he said that the band got the inspiration for the violins used in the song from the work of another renowned musician. In the book All We Are Saying: The Last Major Interview with John Lennon, while speaking to interviewer David Sheff in 1980, Lennon spoke on the origin of the song.

He stated that the idea of the song was conceived by Paul McCartney. “It’s hard to describe, even with the clarity of memory, the moment the apple falls. The thing will start moving along at a speed of its own, then you wake up at the end of it and have this whole thing on paper, you know? Who said what to whom as we were writing, I don’t know.” Although, according to an article by The New Yorker in October 2021, McCartney stated that he got the inspiration for the song from an old lady who he knew that lived alone. He would go shopping for her and sit in her kitchen listening to stories while her Crystal radio played. “Just hearing her stories enriched my soul and influenced the songs I would later write,” he revealed.

George Harrison’s Contribution To The Song

Lennon, the 1981 Grammy Award Winner for Album of the Year (Double Fantasy) disclosed how George Harrison came into the picture: “I do know that George Harrison was there when we came up with ‘Ah, look at all the lonely people.’ He and George were settling on that as I left the studio to go to the toilet, and I heard the lyric and turned around and said, ‘That’s it!'”

He also said that the song might not have been as it was without the input of actress Jane Asher, who was Paul’s girlfriend at the time.  “The violins backing was Paul’s idea. Jane Asher had turned him on to [composer Antonio] Vivaldi, and it was very good, the violins, straight out of Vivaldi. I can’t take any credit for that, a-tall.”

Stats of the Song and the Rubber Soul Album

The song’s release occurred at the same time as The Beatles’ final tour, which itself had been preceded by Lennon’s controversial statement that the band was more popular than Jesus Christ. “Eleanor Rigby” was a commercial success for The Beatles in the U.S.. The track maintained the No. 11 position on the Billboard Hot 100 and remained on the chart for eight weeks. As noted, it appeared on the album Revolver, which topped the Billboard 200 for six weeks and remained on the chart for a total of 85 weeks.

However, in the United Kingdom the song became even more popular when it was released together with the single’s B-side, “Yellow Submarine.” The song reached the top position for four weeks and remained on the chart for additional nine weeks, whereas Revolver maintained the No. 1 position for seven of its 34 weeks on the chart.