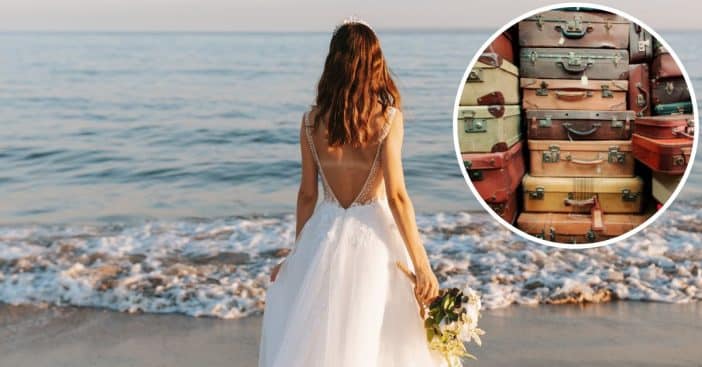 Airlines are currently struggling with the burden of increasing demand for air travel, affecting their ability to attend to many passengers, thus leading to a lot of luggage getting ‘lost’ or delayed. This was the case with Latrice Rubenstein, who married in Portugal in late June. After her wedding, she booked a flight from Lisbon to Dublin via Frankfurt using Air Canada, a company partnering with the German air travel giants Lufthansa.

While on the flight, her luggage was discovered missing, which compelled her to purchase new clothes and other necessary items needed for her honeymoon. While speaking with Insider, she said they were given the unfortunate information that none of the luggage was on board with the passengers, which had been recurring for a while now.

Latrice, while speaking to Insider about the contents of her missing luggage, said the bags had her wedding dress, jewelry, and other important items such as speakers. One most important item was the vessel of sand which the couple had during a sand ceremony held during their wedding. This ceremony stood as a marker of togetherness in marriage.

“My husband left his medicine in the bag, so I was a little concerned about that because he has some health issues like his asthma,” she said to Insider. According to her, the constituents of the bag were invaluable, but she put the monetary value at around $10,000.

Frustrated Efforts To Get Her Luggage Back

In her efforts to locate her missing bag, she contacted Lufthansa and Air Canada who operated her flight, but she was frustrated at the high level of ineptitude displayed by the service provider.

In fact, when Latrice touched down at the Dublin airport, she was surprised to see a lot of luggage littering the whole airport. This made her worried that she might be unable to recover her items.

Latrice’s Maid Of Honor Had The Same Experience

The newly married woman is not the only one affected by the current problem facing airports worldwide. Latrice’s maid of honor, Cynthia, also stated that her luggage went missing on her flight from Portugal to San Diego via London Heathrow and Toronto. Unlike the case of Latrice, hers was eventually located only because it was tagged with an Apple AirTag.

Cynthia stated that she tracked the missing bag to Toronto before it was rerouted to San Diego. She told Insider that she went back to the airport looking for her luggage, but airport staff denied having it until she gave them hints on the bag’s location. “Clearly, the woman I talked to talk to somebody who found that bag because I was sitting there saying: ‘I can see this here with the Apple AirTag,'” she said.

Official Statement By The Airlines

Responding to the story of lost luggage, Air Canada has given a formal statement to give insight into the unfortunate occurrence. “The global air transport industry is currently challenged due to issues with airports and third-party providers of such services as passenger screening, customs, and air navigation.

We are working hard with these partners and governments to resolve these issues as they are affecting the performance of airlines,” the company said while also adding that the company never operated the flight in which Latrice lost her luggage.

Click for next Article
Previous article: 8-Year-Old Whose Mother Died Of Cancer Given Surprise Birthday Party After Getting Just One RSVP
Next Post: Elderly Couple Stranded In Mexico Out Of Heart Medications As Homebound Flight Is Canceled Twice