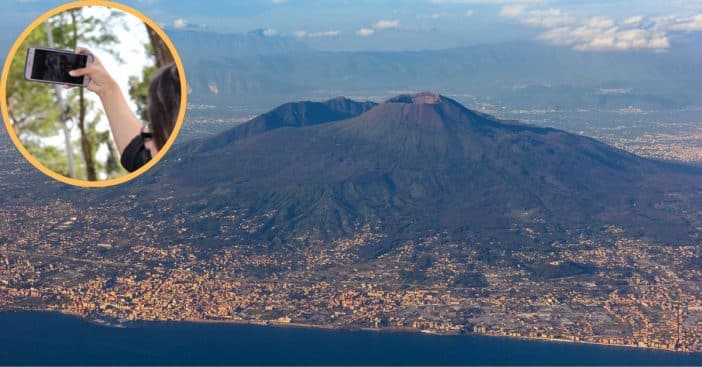 A picture is worth a thousand words – but is it worth life and limb? A U.S. tourist nearly had this question answered in a very lethal way when he tried taking a selfie at Mount Vesuvius, only to fall into the crater. The man was identified by NBC as Maryland resident Philip Carroll.

The incident occurred on Saturday when Carroll took an unauthorized path to the summit of the active volcano. The tourist was left with some injuries and was brought into custody, charged with encroachment on public land or land for public use.

One tourist takes a tumble at Mount Vesuvius

Just above the Bay of Naples, Italy, stands Mount Vesuvius. The active volcano is made up of a towering cone surrounded by a summit caldera that’s actually the result of an even taller structure that collapsed. It is the only volcano along the European mainland that has erupted with the last century and is considered one of the most dangerous volcanoes in the world. Each year. some 2.5 million tourists visit the historic area, and among those visitors was a 23-year-old Baltimore episode looking for some good photos.

A spokesperson for the Carabinieri of the Forestry department of the Park of Vesuvius believes that tickets to Vesuvius, which are limited to 2,700 a day, sold out, and this prompted Carroll to take an unauthorized path. This led him to the opposite side of the crater than where tour guides would lead guests, and is prohibited to visitors. There, he tried to take a selfie with his phone, which fell from his hands. While trying to retrieve it, the tourist also fell.

Local volcanological guides saw several people along an off-limits area of the crater; Carroll had been with some other visitors, which included family members. His attempts to get his phone caused Carroll to slide “a few meters into the crater,” says Paolo Cappelli. It’s a good thing he stopped; any further, Cappeli says, and “he would have plunged 300 meters into the crater.” He avoided this dramatic fall, but Carroll wasn’t out of the woods yet, as he was stuck. Thankfully, some other guests and guides saw his plight and made their way over to help.

Guides were able to pull him up and out of the dangerous crater with the use of rope. Carroll was left with some injuries in the form of cuts and bruises to his back and arms. Otherwise, he was not in serious condition, though an ambulance on the scene did treat these wounds before he was transported to a hospital. Both Carroll and his family members face charges of invading public land.

What’s the most outrageous move you’ve seen someone try to pull for a selfie?

RELATED: Tourists At Yellowstone Catch A Glimpse Of The Park’s Rarest Animal

Click for next Article
Previous article: ‘Indiana Jones’ Screenwriter Confesses A Huge Mistake That Made It In A Film
Next Post: A Lawyer Advises Consumers To Avoid Self-Checkouts