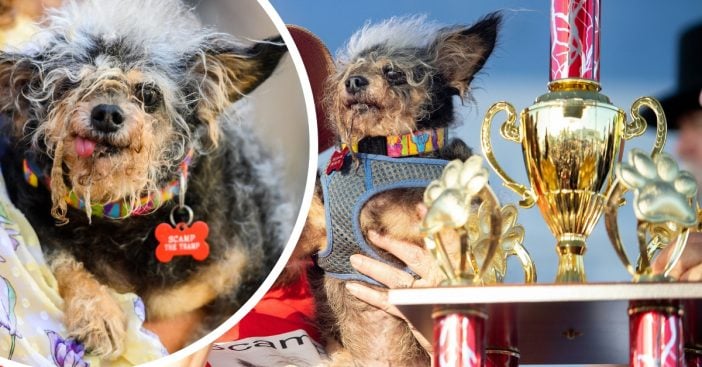 An adorably ugly dog named Scamp the Tramp won this year’s World’s Ugliest Dog contest. The contest was held in Petaluma, California. Scamp has competed for four years in a row and last year he was the runner-up.

Yvonne thinks that Scamp finally got his chance to win after the audience remembered him from previous years. She also said he volunteers in the community with her, which likely helped his odds of winning. His owner, Yvonne Morones, said she will have to change his name to Scamp the Champ now.

See a photo of Scamp

What kind of volunteer work does Scamp do? He is a social therapy dog, a reading dog for an elementary school class, and he represents the Humane Society of Sonoma County. He has worked in a kissing booth to raise money for the Humane Society.

Lastly, he greets passengers at the Sonoma County Airport.

Many people are kind of shocked at his appearance at first, but they quickly realize how sweet he is. Yvonne said, “He’s absolutely adorable. When people first meet him, they go, ‘Oh, he’s kind of scary’ and then he wins them over with his sparkling personality.”

She rescued Scamp in 2014. She continued, “I call him a Rastafarian dog and I suspect he’s got some DNA from Keith Richards too! Scamp was found as a stray on the mean streets of Compton & I rescued him at his last hour from a Los Angeles animal shelter. His black body hair does not grow & no matter how many trips to the groomer, Scamp’s hair naturally grows gray dreadlocks down his back all the way to his tail. No amount of hair conditioner can calm down his tresses!”

This isn’t the first time Yvonne has owned an “ugly dog.” Her previous dog, Nana won the World’s Ugliest Dog Contest six years in a row, way back in the day.

So, what did Scamp win? He won $1,500 and a matching donation for the Humane Society of Sonoma County, Angels Fund and Compassion Without Borders. What do you think about Scamp? Do you think he’s ugly or cute?