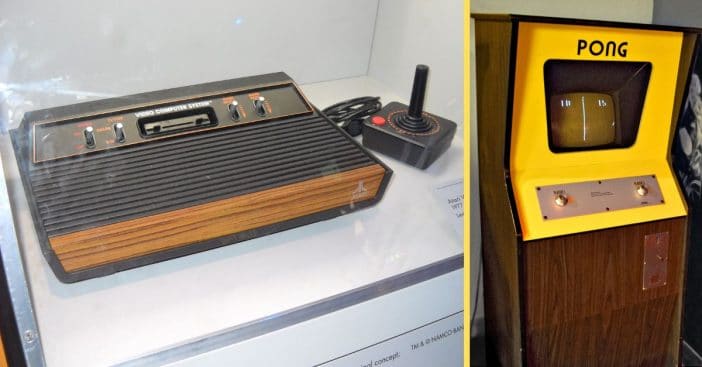 From slicing baddies to raising a farm, performing grand guitar solos or unraveling puzzles – video games have done it all. We’ve inched towards general ideas of digital gaming in subtle ways across the decades with contraptions like pinball machines, but every lasting fad had some key starting points that laid the groundwork for others to follow. In the world of gaming, that was Atari, which celebrates its 50th anniversary on June 27, 2022.

Today, giants of the industry have their revolutionary titles that transformed the landscape of gaming. But before there were any pipes for Mario to jump out of, or even before a single tetromino fell to the ground, there was a pair of lines and a single dot bouncing back and forth. That’s right: it’s been 50 years since the simple but essential Pong, the arcade experience that is the grandfather to video games today. Revisit what makes this nostalgic brand so important even today, and how its big anniversary is getting celebrated.

Playing and changing the game

The future founding fathers of Atari, California-based Ampex employees Nolan Bushnell and Ted Dabney, met in 1969. Bushnell came to the job having laid eyes on one of the first seeds planted in the field of video games: Spacewar. The game was developed by MIT Professor Steve Russell, along with two students, back in ’62. There, the game was definitively parked, as it operated on the same giant, room-sized behemoths of the time, far from the highly portable consoles we have six decades later. Indeed, gaming in those days pretty much exclusively meant going somewhere else with a giant machine to play, like Lagoon Amusement Park where Bushnell also worked. Arcades looked a bit different in the ’60s compared to the ’80s, though, which in part led to them being considered denizens of gambling-riddled sin for a while. IGN notes that Bushnell envisioned bringing experiences like Spacewars, less about luck and more about a player’s skill, to these venues. What else do you do when you have a dream? Chase it!

RELATED: This Is The Crazy Reason Why America Outlawed Pinball In The ’40s

Not everything is an instant hit, and the first attempt by Bushnell and Dabney had a lackluster start that still managed to entice 1,500 sales. This first attempt can still be called a success for bringing in enough money for the duo to make another attempt, bring a streamlined, accessible design to coin-operated gaming machines. In 1972, they named their company Atari after the Japanese word “ataru,” which refers to hitting a target, or an exclamation of impending victory. Accessibility was a big hurdle for making early video game or arcade games mainstream, so that’s what Atari focused on. It chipped away at the hardware needed to create some semblance of a digital activity. Success was not necessarily expected with this next big go, and they even assigned newcomer Allan Alcorn to fiddle with it as an exercise. Limitations at the time really defined what could or could not be done, and this explains why, finally, one of the first mainstream video games is made of lines and dots pinging across a screen, played on one of the earliest video game consoles, the Magnavox Odyssey. This virtual table tennis game inspired Pong not long after.

Celebrating the 50th anniversary of the Atari legacy

Visibility is crucial for any big goal. Is there a cause you support? Bring exposure to it. A new creative project? It needs an audience. Anchored in giant computers tucked in very specific labs, the idea of early video games had no way of settling into the minds of potential players anywhere, in America or abroad. Atari changed that, working with and against the technological limits at the time. By around ’77, people could secure the Atari VCS, a home console complete with joysticks and keyboard and mouse compatibility. Not only did this make consoles something people could acquire – instead of sneaking into MIT tech labs, as Bushnell did – they could play multiple games on one system on demand. It wasn’t one game per piece of machinery, like an arcade; all of an arcade’s contents could be enjoyed at home. That idea alone was so revolutionary and unfamiliar, it actually took people a while to understand. A similar situation would happen when Super Mario 64 brought players from a flat to 3D space and the idea of camera options was barely existent.

Speaking of the company itself, its reign in the spotlight came and went, impacted by changing hands and mounting competition, especially from a Japanese playing card company called Nintendo. The concept of at-home consoles had been realized and spread; it was time for the NES to take it from there. But today is about 50 years since the future of gaming was given a remote possibility of existing thanks to Atari. The company is celebrating this occasion with Atari 50: The Anniversary Celebration. This, Engadget writes, is taking the form of a massive collection from its catalog coming this fall. The company that birthed the idea of home consoles will see its old, along with some new retro-inspired, games land on modern platforms like the Switch, Xbox, and Playstation. Perhaps this is the most fitting thank you these companies can give to the one that brought video games into the home, when technological limitations were at their greatest. Because of this, developers could also push the envelope; bringing games home meant they could grow. Arcade games were meant to be played in one brief sitting. With the chance to have more data stored, gamers could save progress and games could become long, outright narratives.

All that, from one daring move 50 years ago.

RELATED: 11 Awesome Video Games That Ruled Your Childhood, Because I Know, You Miss Them Too