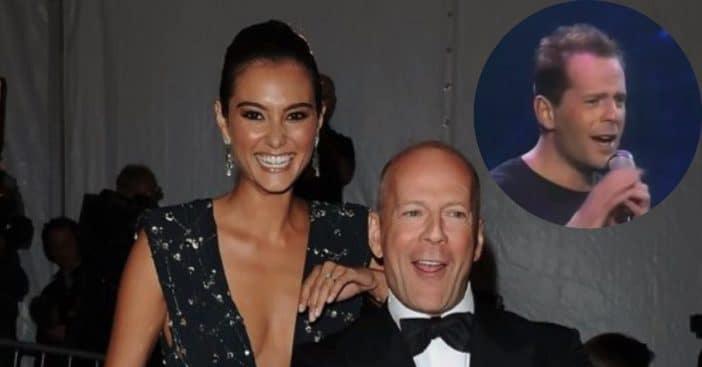 Model Emma Willis has always been a supportive wife to Bruce Willis, and even more so following his aphasia diagnosis. She recently showed appreciation of his strength and resilience, sharing a throwback clip of her husband singing with The Temptations and writing in her caption, “My motto is don’t let the fear stop you. Why? Because fear constantly stops me. Which is another reason I fell for my husband; fear has never stopped him.

“I mean, what kind of next-level confidence does it take to sing lead with The Temptations?” she added. “You can say what you want (and boy have they), but this guy has always been led by his passion and has never let naysayers stop him from, well, anything. And I have so much respect, love, and admiration for that man because of it. Enjoy this little ditty that warms my heart.”

Emma Willis talks about her relationship with Bruce

The couple met in 2007 at the gym, where they got friendly with each other and, two years after, they got married. Bruce had been formerly married to Demi Moore, with whom he shares three children, Rumer, Scout, and Tallulah. Bruce and Emma welcomed their first child together, Mabel, in 2012 and their second, Evelyn, in 2014.

Both parents have had a loving relationship since they met, and Emma never passes up a chance to show appreciation to her husband. “One of the many reasons I fell hard for Bruce was because he never takes anything too seriously, as you can clearly see here at our first (and last) Met Gala, as newlyweds back in 2009. He’s just up for a good time no matter where or when and I’m here for it,” she wrote alongside a post she made on Instagram, showing herself and Bruce having a hearty time Met Gala.

Willis was diagnosed with aphasia

Earlier in 2022, the Die Hard actor was diagnosed with aphasia, a disorder that affects the ability of people to communicate or express themselves. The actor also announced that he would be stepping away from acting after the diagnosis, seeing that the disorder affects the ability to read, speak or listen, all of which are essential for acting.

In a recent interview, Emma shared the impact this sad news has had on her as well. “That amount of care for everyone else within my household had taken a toll on my mental health and overall health, and it served no one in my family,” she said.

Willis received a lot of support

His wife and children and ex-wife Demi Moore have been supportive of the actor. Demi had announced the diagnosis on her Instagram, where she wrote, “To Bruce’s amazing supporters, as a family, we wanted to share that our beloved Bruce has been experiencing some health issues and has recently been diagnosed with aphasia, which is impacting his cognitive abilities. As a result of this, and with much consideration, Bruce is stepping away from the career that has meant so much to him. This is a really challenging time for our family, and we are so appreciative of your continued love, compassion, and support.

“We are moving through this as a strong family unit and wanted to bring his fans in because we know how much he means to you, as you do to him,” she continued. “As Bruce always says, ‘Live it up,’ and together, we plan to do just that. Love, Emma, Demi, Rumer, Scout, Tallulah, Mabel, & Evelyn.”

Click for next Article
Previous article: Brooke Shields Is Fighting Back Against Ageism In Hollywood
Next Post: Rolling Stones Postpone Shows Due To Mick Jagger’s Positive COVID-19 Test