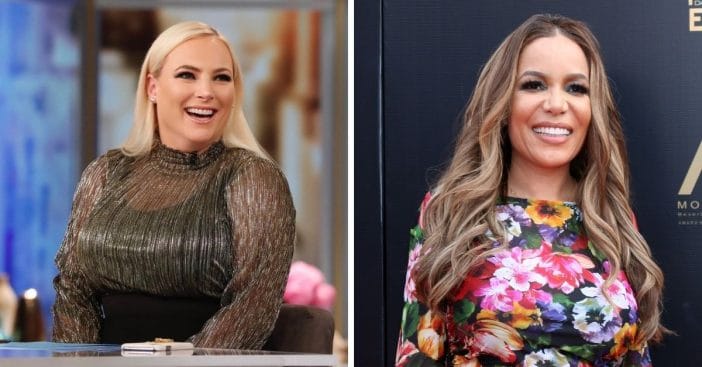 Meghan McCain has recently opened up about her friendship with former The View co-host Sunny Hostin. McCain didn’t get along with a lot of the hosts there due to political differences, but she says Sunny never “demonized” her. “Sunny is one of the greatest TV presences in all of television. I keep telling her she should have her own show,” she says, speaking to host Carlos King of the Reality with The King podcast. “I don’t know why MSNBC isn’t trying to poach her for Rachel Maddow’s spot.”

She continues, “She’s by far the most politically savvy person on that show. And extremely curious in a way I didn’t find anyone else I worked with. Like, curious about different aspects of politics.”

Meghan McCain on her friendship with Sunny Hostin after ‘The View’

As aforementioned, she’s butted heads a lot with the other co-hosts such as Whoopi Goldberg and Joy Behar. And to this day, McCain doesn’t have much of a relationship with them. “She’s the only cast member I still have a relationship with,” McCain continues. “I have such love for her and respect for her. She’s a really good person and she didn’t demonize me the way a lot of other people did, for whatever that’s worth.”

McCain left The View after four years on the show. She was known for being the lone conservative on the show, which often meant she was left arguing with the other co-hosts about different political topics. “It was a privilege to be on for four years. I have moved on. I don’t watch the show at all. It doesn’t really enter my lexicon that often, even just the feeds I follow on Twitter and the news I read and the pop culture I consume,” she said while on the podcast. “Most of the pop culture I consume, it’s a lot of Housewives, so I don’t watch anymore and it would be too weird to watch.”

She continues, “I don’t miss it and I think it’s because I had such a hard time my last season. It was a really hard time in my life. I’ve been really open, in my book, about what happened. I felt like I owed it to give more context to my experience. I think my experience on the show suffered a lot with COVID and Zoom. I think it’s a lot easier to hate someone through a box and through a screen and to not understand where they’re coming from.”

Despite not sharing any political views the same as McCain’s, Hostin has had nothing but kind things to say about her former co-host. “I certainly don’t share any of her opinions … at all … about anything … but I don’t feel that way about her. I can’t claim to understand her because I think she’s very complicated. Her experience is her experience. No one can say that she didn’t experience it in that way because it’s hers. I didn’t see it that way. I didn’t experience it the way she did. But I’m going to defer to her that she experienced it like that.”

Click for next Article
Previous article: Why Are There Only 8 Buns But 10 Hot Dogs In A Pack And Is That About To Change?
Next Post: Wynonna And Ashley Judd Share Memories Of ‘Unfailingly Kind’ Mother