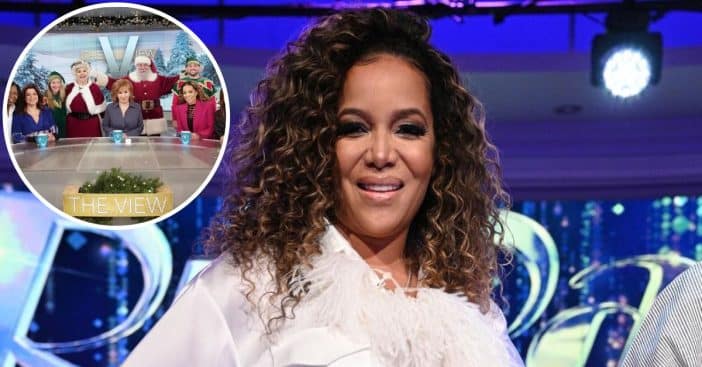 The View co-host, Sunny Hostin, has been labeled a hypocrite. The 54-year-old once expressed her view on cosmetic surgery while anchoring one of the show’s episodes, revealing how proud she is flaunting her skin. However, it seems Sunny has backtracked on her word.

Recently, her appearance became a concern among her fans and users, who noticed a marked difference when a picture where she and her other co-hosts posed for a Christmas-themed photo surfaced on the View’s official Instagram page.

In the photo, Sunny Hostin was spotted alongside Whoopi Goldberg, Ana Navarro, Joy Behar, and Alyssa Farah Griffin, who all maintained their regular seats at the discussion table while looking all glammed up and smiling at the camera.

RELATED: ‘The View’ Fans Slam Sunny Hostin For Being Insensitive During An Episode Of The Show

Also, the picture detailed Christmas decorations and lightning around the studio while Santa Claus, Mrs. Claus, and two elves were spotted behind the co-host. “It’s officially the holiday season at The View!” the caption reads.

Fans and IG users, however, overlooked the pretty holiday designs and focused on commenting on the panelists, especially Sunny, whose appearance caught people’s attention. Her attempt to look younger by using botox displeased the fans, “Sunny needs to chill on the Botox…Looks like she’s bleaching her skin also.”

A fan didn’t hesitate to hide her distaste for the actress as she claims Sunny’s dependency on the cosmetic regimen is getting too much. “Sunny Hostin’s bad Botox has gotten to her brain.” Another user made a sarcastic comment, “Botox works wonders.”

The hosts did not hold back in showing their disgust for the brand’s advertisement and didn’t spare the fashion label’s ambassador, Kim Kardashian, in their brawl against the company. The panelists attacked Balenciaga for choosing to run the ad and failing to apologize to the consumers after the consequent backlash.

Sunny talks hard against the brand while explaining the reason why viewers would not see the controversial ad on their platform. “We can’t even show the picture because it’s so distasteful,” Sunny noted while describing the brand’s current designs. “But what’s also very distasteful is, like, Balenciaga lately. Their stuff is just ugly. I mean, the bag that little girl is holding is ugly.”