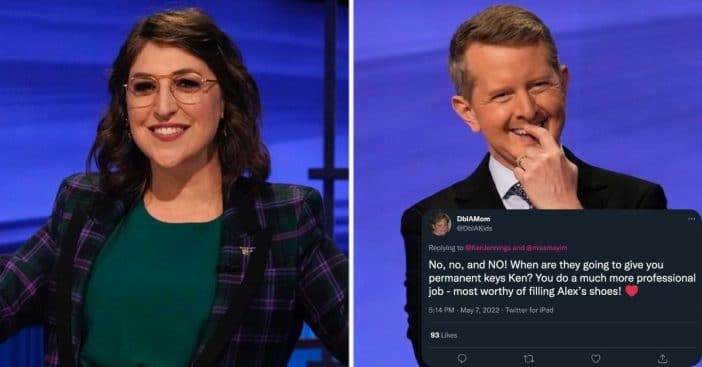 Fans of Jeopardy! are unhappy and even protesting after Ken Jennings revealed co-host Mayim Bialik’s future on the show. Most recently on the show, Gen Z champion Mattea Roach had her streak come to an end after 23 games won. Jennings took to Twitter the next day to congratulate Roach on her run, while also simultaneously giving fans a glimpse into what his own future looks like.

“I’m handing the keys back to the talented actor-producer-writer-director (!) @missmayim for a few months,” he explained. “We are lucky to have her! Thanks for watching, and I’ll be back before the end of the season.”

Mayim Bialik is taking over hosting duties again for now

I’m handing the keys back to the talented actor-producer-writer-director (!) @missmayim for a few months. We are lucky to have her! Thanks for watching, and I’ll be back before the end of the season.

This, however, should not come as a shock as it was actually announced back in December that Jennings and Bialik would be sharing hosting duties after the show went through a slew of celebrity guest hosts for a while. Now, Jennings reveals that he’ll be going behind the camera and has yet to share a specific date of when he’ll return to hosting duties.

Of course, a lot of fans who favor Jennings as host, are upset over this. “No, no, and NO! When are they going to give you permanent keys Ken? You do a much more professional job – most worthy of filling Alex’s shoes! ❤️,” one person writes. Another adds, “Wait, what?? You must be joking, right? You are the best new host to perform the job. Come back soon, the sooner the better.” A last fan says, “For a few MONTHS?? Guess I won’t be watching for that long, then (unless another superchamp comes along). 😃👍.”

Deadline reports that season 38 is slated to continue airing new episodes until July 29th, so doing the math correctly, we can only assume that Jennings may be back hosting by summertime? Until then, Bialik will be taking over hosting duties, and she also hopes to stay in that role long-term.

Click for next Article
Previous article: Jack Kehler From ‘The Big Lebowski’ Dies At Age 75
Next Post: Hall Of Fame Quarterback Brett Favre Named In Lawsuit For Misspent Welfare Funds