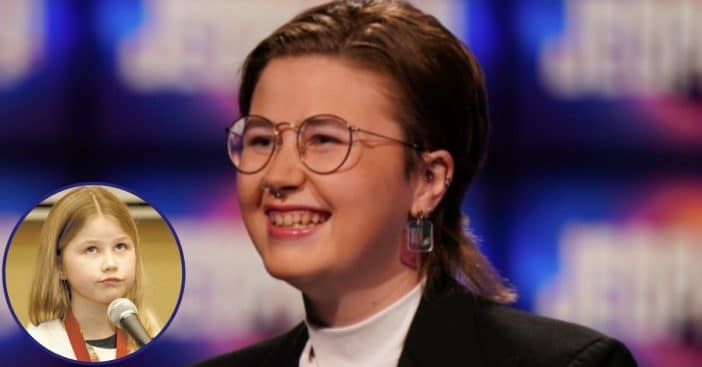 Jeopardy! champ Mattea Roach has broken out a little throwback for fans to prove that her many facial expressions have always been a part of her. A fan took to Twitter to share a photo of young Mattea, writing, “Turns out in 2008 I photographed Jeopardy champ, Mattea Roach, during the NB provincial spelling bee championship. According to the caption she finished second after getting stumped on “Soiree”.”

Mattea retweeted that and added her own caption, saying, “Many have made note of my colorful facial expressions while playing Jeopardy – here is proof that I come by it honestly/have been making weird faces for a long time!”

Many have made note of my colorful facial expressions while playing Jeopardy – here is proof that I come by it honestly/have been making weird faces for a long time! https://t.co/47YMp7s9Xq

In a separate tweet, Mattea added, “also bc [because] several have commented here and elsewhere about the fact that I use American spellings on a lot of words – I started using them as an act of rebellion against my grade one teacher and I’m stubborn enough that I never switched back! I’m stuck like this now.”

Mattea, the first Gen Z-er to have a winning streak on the popular game show, has been impressing everyone lately. When asked how she feels to be the mega champion on that Gen-Z–millennial cusp, she said, “It feels weird,” adding, “I certainly played the game in a way that’s quite different than what’s been seen before. Norms of what’s considered to be “professional behavior” in general have shifted a lot over the past five years and during the pandemic. People haven’t been in office environments much; they’re working from home and developing a more casual way of interacting with one another. Anytime you have a generational shift of new people coming of age, conversations happen about how they’re shifting professional norms. It’s not entirely negative.”

She was also asked how she plays the game “differently,” explaining how just because she’s young and plays the game in a different manner than most do, doesn’t mean she doesn’t take the game seriously. “I wasn’t, maybe, demonstrating a level of seriousness you would associate with somebody taking the game very seriously. Especially with long-running champions, the only other person I can think of who made side comments and demonstrative gestures was Austin Rogers. He’s not ancient history by any stretch, but since we had so many long-running champions who hadn’t played the game that way, it perhaps clashed for people seeing something so different from Amy Schneider or Matt Amodio. They showed personality and weren’t boring to watch, but I was much more animated.”

At the time of the published interview with Vulture, Mattea has won 22 consecutive games, the fifth-best in history, and has racked up $534,984 in prize money, which she says will go towards her student loan payments.

Click for next Article
Previous article: Family Of Gilbert Gottfried Releases Video Of Comedian In His Final Hours
Next Post: Jane Fonda Featured On The Cover Of Glamour Magazine For First Time In 60 Years