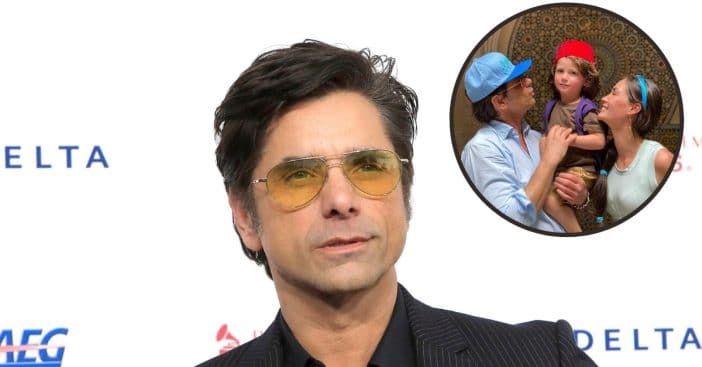 Full House actor John Stamos and his wife, Caitlyn McHugh, welcomed a son in April 2018. The 58-year-old star has stated how much he loves being a father to Billy, who is named after Stamos’ late father.

“I’ve waited my whole life for this,” he told Entertainment Tonight in 2018 while Caitlyn was pregnant with their baby.

A Fuller House with Billy

Stamos was first married to Rebecca Romjin from 1998 until their divorce in 2005. In 2018, he married 34-year-old Caitlyn , a model and actress. The start of their love story actually dates back to 2011 when they first met while filming an episode of Law and Order: SVU.

At the time of their first meeting, Caitlyn was seeing someone, but the duo would eventually meet again with Caitlyn in the audience and her roommate acting alongside Stamos in Fuller House. They started dating in 2015 and got engaged in 2017. John described Caitlyn back then as a “gentle, kind, graceful soul who would be a good mother.”

The actor’s long-time wish to be a father came true as he announced less than three months after their engagement that Caitlyn was pregnant. A few months later, the couple welcomed Billy and Stamos was overjoyed. “From now on, the best part of me will always be my wife and my son,” he wrote in his Instagram caption to celebrate his son’s arrival.

He Had Always Loved Kids

His co-stars on Fuller House confirmed that Stamos was a natural with the babies. They said that he was the “baby whisperer” of the cast. He was not the only one rooting to have kids; other people were in on it, too, knowing how good a father he would make. “He’s the best with babies and kids,” Fuller House co-star Candace Cameron Bure told People. “So, he should have kids of his own, but if not, there are plenty of TV children to go around.”

The 58-year-old has the sweetest moments when talking about Billy and it’s obvious that age does not stop him from fatherly activities as he shares playful photos and mirror selfies of them having fun or shaving their beards (or lack thereof). “If men in their mid-50s are afraid of taking it on, I hope I’m setting an example,” Stamos said. “It’s a little harder, because he runs faster than I do, but other than that, it’s the greatest thing in my life. I’m so happy I did it.”

Despite all the amazing roles he has played on set, his favorite role is off-camera being a father, which he makes very clear.

“Being a parent is about sacrifice. You don’t get rewarded for it. You don’t get a trophy or a ring, but what you do get is a child who is more loving, more kind, and a smarter version of you, and I think that’s special,” he gushed. He admits to making some lifestyle changes to be a present dad to Billy, such as getting up early in the morning. His heart is full, and it is a lovely sight.

Click for next Article
Previous article: Don Henley Wouldn’t Continue The Eagles Without Glenn Frey’s Family Blood
Next Post: ‘Grease’ Returns To Theaters With A Twist In Honor Of Olivia Newton-John