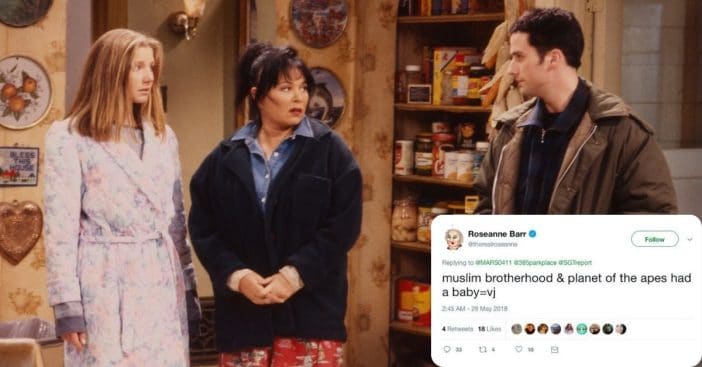 A new documentary called Roseanne: Kicked Out of Hollywood explores the long-time comedian being fired from ABC, from her own show, after a controversial tweet. The 69-year-old spends the documentary explaining her reasoning behind the tweet that led to her being fired, which led to the cancellation of her revived sitcom Roseanne, only to come back and be renamed The Conners.

Barr went on to call her firing a “witch-burning” and claimed that she had actually been having issues with ABC on everything she tweeted, not just the one tweet. “Any tweet that was not ‘I love Hillary Clinton,’ I got a call for,” she explains in the doc.

Barr also once tweeted about a conspiracy theory that a Parkland school shooting survivor had given a Nazi salute at a rally for stricter gun control in the U.S. which was also reviewed by ABC and subsequently removed. “I removed it every time they called,” Barr says. “And they called frequently.”

She continues, “Everyone was begging me to give up my Twitter. Everyone. My kids were trying to lock me out, but I wouldn’t because it’s like I just couldn’t.”

It was a tweet from May 2018 directed at former Obama aide Valerie Jarrett that ultimately led to Barr’s canceled show. “I shoulda not did it, but by God, I was really p—– that day,” she explains in the documentary “And I did something I wouldn’t do if I hadn’t been on that Ambien. It makes you do a lot of crazy s—.”

Barr adds that she wasn’t even given an opportunity to formally apologize for her behavior. “When they called me up they were like, ‘What possible excuse have you got for why you did this? Why you did such an egregious, unforgivable thing?’ And I said, ‘I have no excuse. The only thing is, I thought she was White. And they said nothing back. And then I said, ‘Let me go on “The View” tomorrow and explain it and apologize. I made a mistake.’”

She continues, “Witch-burning is what it is. Intellectual witch-burning. And arrogance and ignorance. All of the press of the United States, and the world and how they interpreted my tweet without any knowledge of the fact that I was sending it to a journalist in Iran about what was happening to the people in Iran. We were under such terrible censorship and it’s just terrible and frightening.”