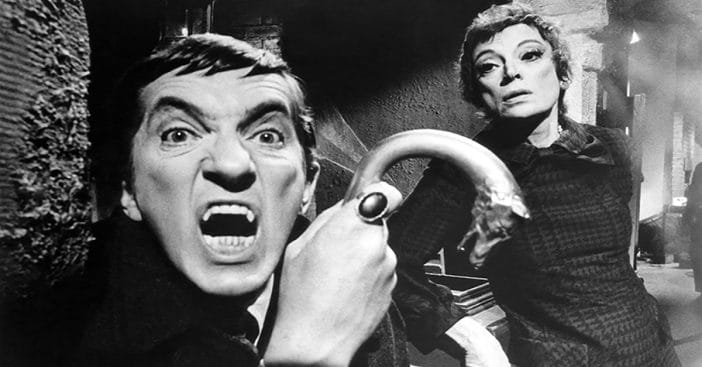 Back in the 1960s, there was an entire generation of kids that would one day proclaim, “I used to run home from school every day to watch Dark Shadows,” the daytime gothic horror soap opera that featured vampire Barnabas Collins and a plethora of supernatural beings.

The show ran from 1966 to 1971 and consisted of an astounding 1,225 episodes. Now, a number of those original runners are offering up their memories of the show in a new collection of essays, Running Home to Shadows: Memories of TV’s first Supernatural Soap from Today’s Grown-Up Kids.

“The essays,” offers book editor and contributor Jim Beard, “were both what I’d hoped for and far more than I expected. There are common threads between them, sure, but there are also individual moments of sweetness, tragedy, humor, and even some shadows. I love each and every entry. The essayists cover every aspect of the show: the original episodes, the films, the toys, the comics and books and beyond.”

At the Heart of Dark Shadows Are the Fans

Actress Kathryn Leigh Scott, who played Maggie Evans and Josette Du Pres on the show, and who wrote the introduction to the book, told Do You Remember, “Our Dark Shadows fans are truly a cut above. And we know many of them as friends now that we see them every year [at conventions and gatherings], and that’s really lovely. I feel like they’ve kind of grown up with this. There are probably 20 or more clubs active on Facebook right now. For me, it was my very first professional job and one of the wonderful things is that the Dark Shadows fans have stayed with us no matter what else we’ve done. And this was the beginning of our careers, so they’ve been supportive of everything. Whether it’s the books that Lara Parker [who played the witch Angelique] and I write, or it’s the other shows that we’ve done or whatever, that’s part of who they know as us. That’s really nice.”

The enduring strength of the Dark Shadows fandom was surprising to Beard, but in some ways shouldn’t have been. “I was more than fortunate to spend 30 years of my life with one of the biggest Dark Shadows fans ever,” he reflects, “and the book is my tribute to her, her passion for the show and to the show itself. I knew the DS community was going strong, but when I started to talk about the book on social media I was floored by the true strength of it. DS fans are not about to go gentle into that good night and let the show become just a fond memory. They are keeping it alive, and in doing so I can see the interest and vitality for it going on and on.”

Running Home to Shadows: Memories of TV’s first Supernatural Soap from Today’s Grown-Up Kids, published by Becky Books, is available now from Amazon, among other places. For a limited time it’s free on Kindle Unlimited and for sale in paperback.

Click for next Article
Previous article: 50-Year-Old Mother Of 8 Acting As Surrogate For Daughter
Next Post: Resurfaced Video Shows Will Smith Telling Wife Jada ‘Don’t Use Me’ For Social Media