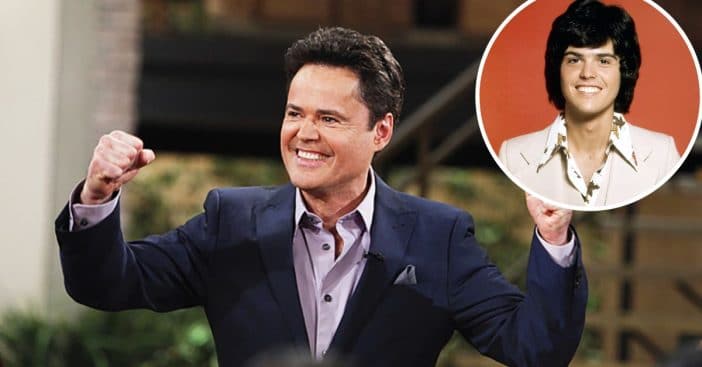 Donny Osmond was a child and teen star but somehow managed to avoid scandals and the “child star curse.” He is still working at 64 years old and has had a very successful career as an adult too. So, how did he reinvent himself and his career so many times over the years? Donny explains it all and he said that it wasn’t always easy.

He admitted that it was really difficult to break out of being a child star and have a different type of image later on. Donny said, “I decided long ago that I wasn’t going to do it with scandals, trickery or promotional campaigns.”

He added, “I was going to do it with my music, which is a really difficult way to do it. But it happened. And it took me 10 years. But I wanted the music to speak for itself. … It’s very difficult to break out of that teenybopper career. But thank goodness that through perseverance and a lot of support from my fan base, it happened. But it takes an awful lot of work to be accepted as an adult.”

Just last year, Donny released his 65th album called “Start Again.” He admitted, “I have gone through so many incarnations. And every time one of those incarnations came to an end, you start again. I had to keep reinventing myself. We all start again many times in our lives.”

Much of his success was due to the duo he created with his sister, Marie Osmond. They had the variety show Donny & Marie for many years and later performed together in Las Vegas. These days, he is working on his own solo show and is excited to do things on his own.

Donny also recalls being told he was a has-been at age 21. He said he never accepted it and fought hard to stay in show business. He concluded, “The truth is, without trying to sound cliché, I love what I do. I love getting on stage. I love singing and entertaining. To me, yes, it’s a job and I work hard at it, but there’s something about the magic of show business.”

RELATED: Donny Osmond Says His Days Of Success As A Teen Were Very Lonely

Click for next Article
Previous article: Sally Field Claims Burt Reynolds Made Up That She Was The Love Of His Life
Next Post: With Gray Hair In Style, Here Are The Best Tips To Compliment That Color