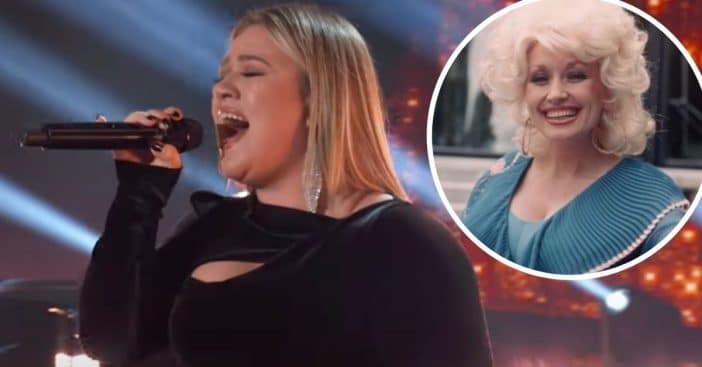 Kelly Clarkson honored country icon Dolly Parton by performing “I Will Always Love You” at the ACM Awards last night. The late Whitney Houston may have provided the stunning vocals to the song, but Parton is actually the genius behind the powerful lyrics.

After she finished up her incredible performance, she was joined onstage by Parton and given a standing ovation by the audience. “Give it up for Dolly Parton,” Clarkson said before exiting the stage.

We will always love @kellyclarkson ❤️ Watch the #ACMawards on @PrimeVideo! pic.twitter.com/Tp9cpPN55I

“I know that Whitney is smiling down on us tonight, so thank you very much — she would be proud of that,” Parton said after the performance, paying tribute to Houston who provided the stunning and timeless vocals for a timeless song, and also went on to become one of the best-selling singles of all time. “I was backstage trying not to cry my false eyelashes off — slinging snot in every direction and tears,” Parton continued. “But anyway, that was an amazing job!”

Clarkson first announced that she was going to be paying tribute to Parton during a taping of her own show, The Kelly Clarkson Show. “One word: DOLLY,” she wrote on Instagram alongside a short clip to announce the exciting news. “That’s right, y’all! I’m so excited to announce that during this year’s @ACMawards, I’ll be performing a tribute to the show’s host @DollyParton! Don’t miss the #ACMawards LIVE Monday, March 7, only on @PrimeVideo.”

Check out the full performance below of Clarkson’s powerhouse rendition of “I Will Always Love You.”

Click for next Article
Previous article: Dolly Parton Dedicates Entire 2022 ACM Awards To Ukraine
Next Post: Johnny Cash Honored On What Would Have Been His 90th Birthday