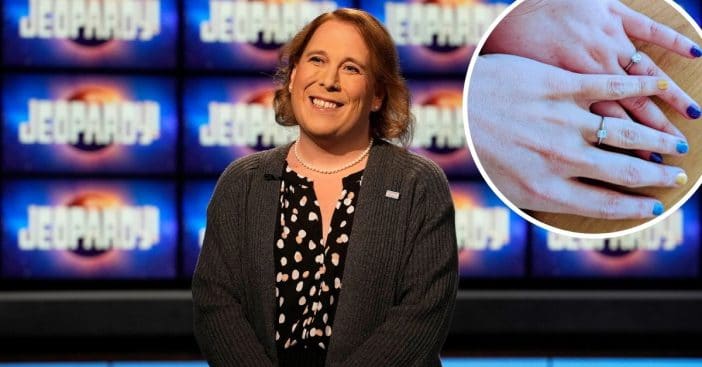 Jeopardy! champion Amy Schneider has something else to celebrate! Amy just shared the news that she is engaged to Genevieve Davis. Amy shared a photo on Twitter of both of their hands wearing engagement rings.

She wrote, “I have an announcement: Genevieve is no longer my girlfriend… she’s my fiancée!!! I couldn’t be happier or more proud to spend my life with the very best person in the entire world.”

I have an announcement: Genevieve is no longer my girlfriend… she's my fiancée!!! I couldn't be happier or more proud to spend my life with the very best person in the entire world 🥰🥰🥰 pic.twitter.com/ftd53zxnzF

Amy just finished her run on Jeopardy! recently and she made history in several ways. She became the first transgender contestant to compete in the Tournament of Champions and is the most successful female winner in the show’s history. She was also the first woman to make over $1 million on the show. Her streak ended after 40 games and she is now the fourth-highest earner in regular-season play.

RELATED: Amy Schneider From ‘Jeopardy!’ Explains To Fans Why She Always Wears Pearls

While on the show, fans noticed that Amy was always wearing a pearl necklace. She revealed that Genevieve gave her the necklace after they started dating. She said, “[Being on Jeopardy!] was the first significant time I’d spent apart from her since we’d started dating. And so having that was just a nice, just sort of comforting reminder that, that she was at home waiting for me.”

Distance certainly makes the heart grow fonder in some cases, and it must have done that for Amy and Genevieve since they are now engaged! They live together in Oakland, California. Now, their plan is to travel, and first up on the bucket list is Ireland.

Congrats to Amy and Genevieve!

Click for next Article
Previous article: Kelly Ripa Can’t Believe Her Kids Are All Grown Up As Youngest Son Turns 19
Next Post: ‘ALF’ Cast Then And Now 2022