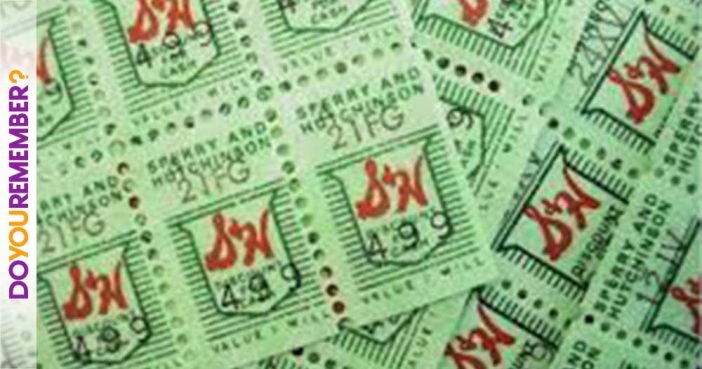 “Before there were discount stores and warehouse outlets, before Amazon and Walmart and China drove down retail prices to the bone, we found other ways to get deals on merchandise. It required a bit of work and active saliva glands, but with the help of our family, we managed to score bicycles and housewares and toys for free, all by collecting S&H Green Stamps.

In yet another example of how incredibly quaint and simple life was not too long ago, retail establishments like gas stations and supermarkets used to give out Green Stamps as part of their loyalty program. You’d collect the stamps, and then paste them into a book, until you had enough to redeem for a swell gift.

Gas stations (which were also known as filling stations) handed out lots of freebies a few decades ago. They’d also give you complicated driving maps that tested your origami skills when it came time to put them away. Air, water, bathroom keys all were readily dispensed to attract and retain customers. Aside from the fact that I’d sooner explode than use a gas-station rest room, it’s hard to imagine feeling a sense of loyalty to Exxon or BP.

Filling up the stamp books was a family affair. My mom would wet a sponge and we’d create an assembly line, one sibling opening to an unused page, the next carefully placing the pane of stamps within the preset outline, the next charged with applying firm and equal pressure to ensure the stamps permanent placement. We could have been assembly line workers.

When the stamps and pages dried, the book took on a crinkly, parchment feel, sort of like the Magna Carta. We’d count and recount the books until we amassed enough to redeem a prize. It was a classic quandary of whether to get the cheap gift quickly, or practice patience and hold out for the better gift, which required many more stamp books. This issue became an allegory for whether it’s better to get rich quick or savor the time and effort required to toil endlessly, for the ultimate and much better payoff. I’m still not clear on which choice I prefer.

The U.S. Postal Service isn’t what it used to be, and most people I know have no idea what a postage stamps costs. But those S&H Green Stamps live on very keenly in my memory. In my family, they taught us humility, because if we were rich, we wouldn’t have to endure the chapped lips and finger cuts. And like a lot of family projects, it was fun doing this together. That was the best prize, for sure.