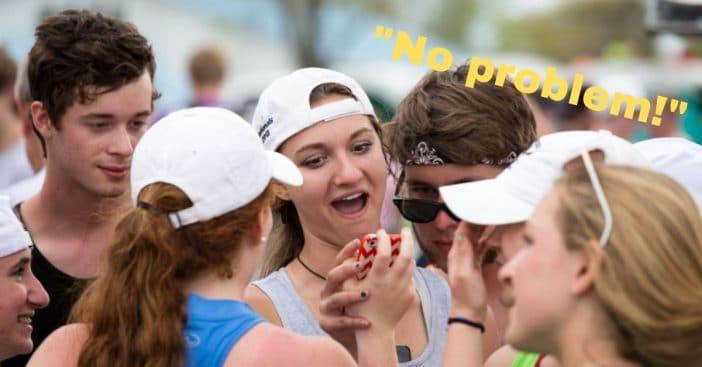 So, why don’t Gen-Z and Millennials like to say “you’re welcome,” but instead say, “no problem” or “no worries?” It’s no surprise that the English language and all of its slang terms have evolved quite a bit over the years—even Millennials are starting to wonder what this new slang term that Gen-Z came up with actually means (i.e. “Sheeeeeesh,” if you’ve ever heard of that one.)

Something that a lot of these cool kids like to say is “no problem” or something to that effect when someone says, “thank you,” to them. Well, one Twitter user has spoken on behalf of all Gen-Z and Millennials as to why they say “no problem” or “no worries” instead of the usual polite wordstrings.

My generation says “No worries” instead of “you’re welcome” to 1) show that doing a favor for someone doesn’t need to be a transactional thing and that we’re happy to help, and 2) because if they really knew how worried we actually were, they’d never ever talk to us again ever.

“My generation says “No worries” instead of “you’re welcome” to 1) show that doing a favor for someone doesn’t need to be a transactional thing and that we’re happy to help, and 2) because if they really knew how worried we actually were, they’d never ever talk to us again ever,” tweets Dr. Bradley J. Summer on Twitter.

RELATED: Meet The Geriatric Millennials, A New Term Defining A ‘New’ Generation — Are You One?

This tweet took off so much that it has since accumulated 168k likes and nearly 25k retweets as of writing this article. Adam Korbl, Founder and CEO of Amplify, has also noticed that these phrases are much more dominant with the younger crowd.  “Recently, I’ve been catching up with my nieces and nephews, and I ask the same question: ‘Why do you guys say, “no worries” or “no problem”?’ They answer that ‘you’re welcome’ sounds formal,” he says.

Korbl continues, “Most youngsters want to be friendly in the very first conversation, and they think saying something so formal can make the other person shy. Or, when they tend to not like someone and never want to meet them again, they would then use formal language.”

It’s no secret that maybe these new slang terms that are quickly making their way into mainstream language are single-handedly causing a steep decline in “formal” language. Now, when the younger crowd talks “formal,” it’s actually talking “serious,” such as receiving a text with actual punctuation at the end of it or words being fully written out instead of “u” or “idk.”

Stefan Dollinger, M.A., Ph.D., and Professor of English Linguistics at The University of British Columbia at Vancouver goes on to say that “you’re welcome” even has an old-fashioned ring to it. Wow! Is “you’re welcome” moving its way out of the English language in society? Certainly, time will tell as language continues to evolve…

RELATED: Millennials Are Finding Joy In This Boomer Hobby During The Pandemic