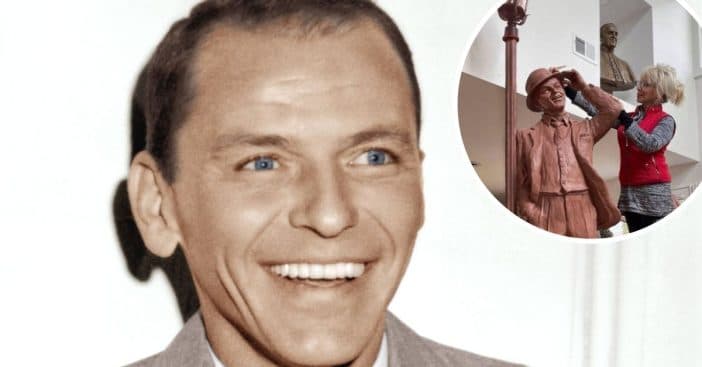 Legendary singer Frank Sinatra is being honored once again in Hoboken, New Jersey. A new bronze statue of the late crooner has arrived at Sinatra Park. The statue was created by sculptor Carolyn Palmer and aimed to make the statue look as realistic as possible, right down to the pinky ring that Frank used to wear. She modeled it after Frank when he was 45 years old.

The statue was recently unveiled on what would have been Frank’s 106th birthday. The six-foot-tall statue now stands in the park, which the city decided to build after feeling like the park needed some finishing touches.

#CarolynPalmer putting finishing touches on @franksinatra statue that will be ‘unveiled’ this Sunday in @CityofHoboken ! pic.twitter.com/KtKz2LMscJ

Comedian Joe Piscopo, who often impersonated Frank on Saturday Night Live, was there as the event emcee. He said, “It sure is interesting because it’s Sinatra. It’s international… Visually it’s great and, again, it’s for the Italians. Mr. Sinatra would appreciate that.”

RELATED: Frank Sinatra Sings Nostalgic Version Of “My Way,” Looking Back On His Life

Some of Frank’s family members including his daughter Tina were seen at the very special event. In addition, the mayor and other city officials watched the unveiling in person. “Frank Sinatra is Hoboken and his legacy lives on today,” Mayor Ravi Bhalla shared. To the mayor, “Sinatra is synonymous with grit, determination, and ultimately, triumph against the odds. And these just aren’t Sinatra qualities, they’re Hoboken qualities.” The crowd also sang “Happy Birthday” to Frank twice during the event.

In case you missed it, you can watch the unveiling of the statue below. Reportedly over 200 people were in attendance to pay tribute to the late singer and wish him a happy heavenly birthday!