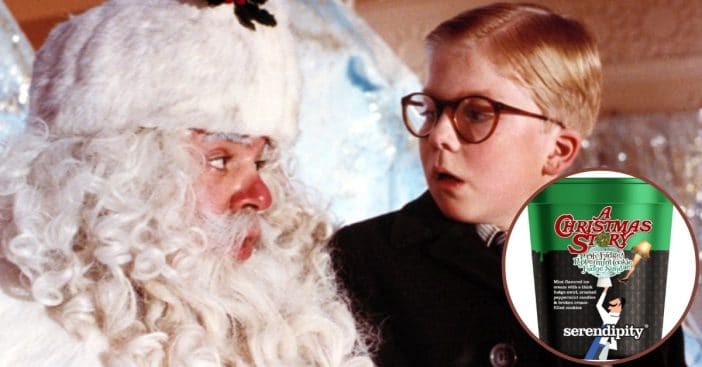 Yes, A Christmas Story now has its own ice cream flavor via Serendipity Brands. The new flavor was created by a partnership between Serendipity brands and Warner Bros. Co., and is called “Oh Fudge! Peppermint Cookie Fudge Sundae.”

It is currently a limited-edition treat for the holidays that includes mint-flavored ice cream, a thick fudge swirl, crushed peppermint candies, and broken cream-filled cookies.

‘A Christmas Story’ ice cream is here for the holidays

The 1983 movie A Christmas Story follows Ralphie Parker reminiscing on one particular Christmas when he was nine years old, and an adult version of himself telling these stories through vignettes. There’s only one thing that Ralphie wanted for Christmas when he was nine—a Red Ryder Carbine Action 200-shot Range Model air rifle, to which his mom says “no” to, in addition to his teacher Miss Shields and even Santa at the nearby department store! They all say the same thing: “You’ll shoot your eye out.”

RELATED: What Ralphie Parker & Company From ‘A Christmas Story’ Look Like, 2021

Of course, Ralphie comes down Christmas morning to open his presents and is disappointed when he opens up all his presents and the BB rifle is nowhere to be found—the one thing he truly wanted for Christmas. That’s when his dad redirects Ralphie’s attention to another unopened present that was hidden. He opens it and it’s the BB rifle he wanted!

Ralphie immediately takes the gun outside for target practice. He fires it at a target perched on a metal sign in the backyard, but it ricochets and knocks his glasses off. He steps on them and breaks them while searching for them, believing he has indeed shot his eye out. He lies to his mom, saying that a falling icicle broke his glasses, and she believes him.

Filmed in Canada, the film received two Canadian Genie Awards in 1984, and in 2012, it was selected for preservation in the United States National Film Registry by the Library of Congress for being “culturally, historically, or aesthetically significant.”