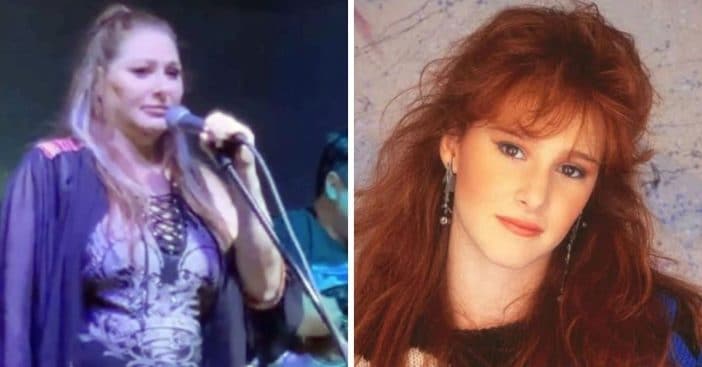 Singer Tiffany, who was best known for her hits in the ‘80s, recently cusses out a crowd of people during a performance. She was putting on a show in Melbourne, FL when she lost her cool with a crowd during an “awkward” performance of her song “I Think We’re Alone Now.”

The 50-year-old was clearly struggling to belt out her hit and even skipped some lyrics at one point. A spokesperson for the singer told Fox News that “Tiffany lost her voice and was frustrated with her performance.”

Some fans were seen supporting Tiffany by helping her and singing along, but others were not so happy with the performance and began heckling and boo’ing. That’s when she responded, “F–k you, guys.”

The video has gone viral online since, which has prompted some fans to show concern for her. “Poor woman,” one person comments on the YouTube video that has surfaced. “She’s trashed. Her fans are loyally singing with her. Oh well we all have our days.”

“As the malls around the country disappear, so does Tiffany’s talent,” another says in a comment. “They’re forever tied together.”

Tiffany on the song that made her famous

“I Think We’re Alone Now” is a cover of the Tommy James & the Shondells song, and was Tiffany’s biggest hit back in 1987. Just back in 2019, she was headlining a tour after she had just performed 55 shows in 53 cities with Debbie Gibson. It was back then when Tiffany told Fox News, “I never get tired of performing ‘I Think We’re Alone Now.’”

She adds, “I was an 8-year-old girl twirling around in her bedroom in Norwalk, California, wanting to be a singer. And it happened. And ‘I Think We’re Alone Now’ led me to success around the world.”