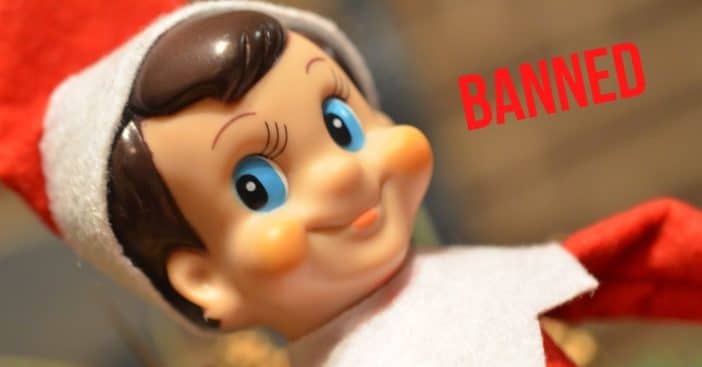 Cobb County Superior Court Judge Robert Leonard of Georgia hilariously banned Elf on the Shelf in a new fake order. On November 4th, he tweeted out, “Tired of living in Elf on the Shelf tyranny? Not looking forward to the Elf forgetting to move and causing your kids emotional distress?”

“I am a public servant and will take the heat for you. My gift to tired parents. P.S. – If you love your elf, keep your elf. No contempt.” Alongside the tweet was a photo of a fake order that he “filed” in court.

Elf on the Shelf officially banned in Cobb County Georgia?!

Tired of living in Elf on the Shelf tyranny? Not looking forward to the Elf forgetting to move and causing your kids emotional distress? I am a public servant and will take the heat for you. My gift to tired parents.

P.S. – If you love your elf, keep your elf. No contempts. pic.twitter.com/JcqAOljbAS

“The Court finds ‘The Elf on the Shelf,’ hereinafter ‘Elves’ represent a distraction to school students and a risk to the emotional health and well-being of Cobb’s young children,” the order reads. “Inexplicably, Elves sometimes move and don’t move overnight. When these Elves do not move, it leaves our children of tender years in states of extreme emotional distress.”

RELATED: Would You Ever Eat Christmas Dinner From A Can? This Mans’ Review Says It All

The order concludes that given the risks, “coupled with COVID and supply chain issues, the Court has no choice but to BANISH all Elves on Shelves from Cobb County.” However, the viral tweet has taken on a life of its own and people are loving it (even if they also love their Elf on a Shelf.)

A personal story from the judge

The Elf on the Shelf has become a tradition, mostly to keep children on their best behavior as the elves watch and report back to Santa on their good or bad behavior. However, Leonard’s disdain for Elf on the Shelf stems from a more personal story where his two daughters blamed their brother for touching the elf and killing it.

“Three children went to school in tears, with one child being labeled an ‘Elf Murderer’ and accused of making the elf ‘lose his magic,’” he writes in the order. “The court has no doubt that day of education was lost to everyone.”

Even Judge Leonard will be on the “nice list” this year

Since posting the fake order online, the judge has received tons of funny replies from parents. One parent even replied that it was “government overreach.” That’s when Leonard posted a “joint statement from the North Pole and The Lumistella Company,” reassuring everyone in Cobb County that the judge has no jurisdiction over “Christmas cheer.”

“The Scoutmasters Elves will be bringing their holiday magic and an extra measure of joy to all those celebrating this season,” the statement concludes.

Thankfully, he put in a good word for me and I will be on the “nice list.” pic.twitter.com/b0pGxYN845

Click for next Article
Previous article: Paul McCartney Votes On “Greatest” Band — And It’s Not The Beatles
Next Post: Veterans United Gifts 11 Homes To 11 Service Members For Veterans Day