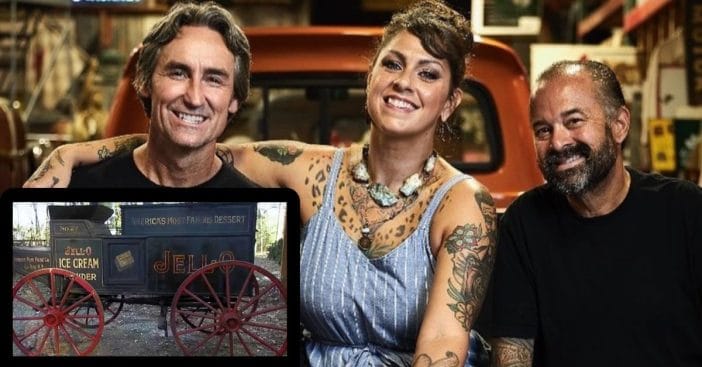 If you thought a Jell-O wagon wouldn’t be one of American Pickers‘ most expensive finds, you’d be thinking wrong. A Jell-O wagon cost Mike Wolfe and Frank Fritz a whopping $6,500 after it was unearthed back in 2017.

Reports state that the wagon dates back to the early 1900s, around 1902 and 1904, and served as one of Jell-O’s biggest advertisements for “America’s Most Famous Dessert” at that time period.

“It’s just so well-preserved. It’s incredible,” Wolfe said after feasting his eyes on the wagon. But this leaves many wondering why a Jell-O wagon would cost so much and the history behind it that makes it so pricey. It wasn’t long after they purchased the Jell-O wagon that founders Jim and Mary Ann Sandoro of the non-profit Buffalo Transportation/Pierce-Arrow Museum made an offer to buy it.

The Buffalo News reports that the wagon was constructed by a wagon maker from Rochester, New York, known as the George Higgins Company. A man named Orator F. Woodward had bought Jell-O’s patent in 1899 and wanted to use the wagons as a means of mobile advertising—literally!

“We’re thrilled to have it,” Jim said at the time after purchasing the wagon in 2017. “It’s an important Western New York relic that we believe is one of the first moving advertising units to be used commercially in the United States.” They ended up paying around $20,000 when all was said and done to purchase the wagon and ship it to New York. At the end of the day, Jim says it was all worth it.