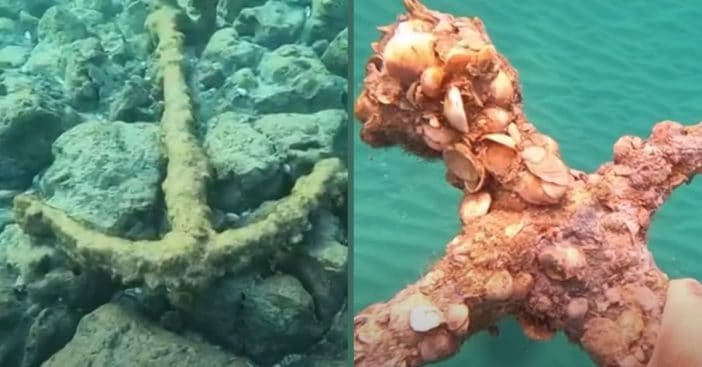 A diver has pulled a 900-year-old Crusader sword from the ocean floor. Shlomi Katzin is the diver behind the mask who pulled the sword out from the seafloor that dated back to the Crusader period and turned it over to the Israel Antiques Authority and was then awarded a certificate of good citizenship.

Katzin found the sword over the past weekend during a deep dive off the coast where waves and undercurrents had apparently shifted sand. As a result, it revealed the sword beneath.

Nir Distelfeld, inspector for the IAI’s Robbery Prevention Unit, has opened up about the findings. “The sword, which has been preserved in perfect condition, is a beautiful and rare find and evidently belonged to a Crusader knight,” he says, and determined it was likely made of iron after further assessments.

Katzin was apparently initially concerned that others would find this ancient relic before IAA officials had a chance to examine it, so he brought it to the Robbery Prevention Unit’s northern district office. Since then, the sword was then handed over to the National Treasures Department.

This isn’t necessarily a surprise for this location

“Once the sword has been cleaned and researched in the Israel Antiquities Authority’s laboratories, we will ensure it is displayed to the public,” says IAA general director Eli Escosido. The director of the Israel Antiquities Authority’s Marine Archaeology Unit says that this specific coast, the Carmel coast, has often provided shelter for ships during storms throughout centuries of shipping activity. This would make sense that ancient relics such as this sword would be hiding beneath (and eventually surface.)

“These conditions have attracted merchant ships down the ages, leaving behind rich archaeological finds,” says the director, Kobi Sharvit. “The recently recovered sword is just one such find.” Discovers further show that the sword was used as early as 4,000 years ago and the final time it was used, about 900 years ago.

Click for next Article
Previous article: KISS Frontman Gene Simmons Is Father To A Fellow Singer, Model & Advocate
Next Post: Pierce Brosnan Wants To Return To James Bond — In A Musical