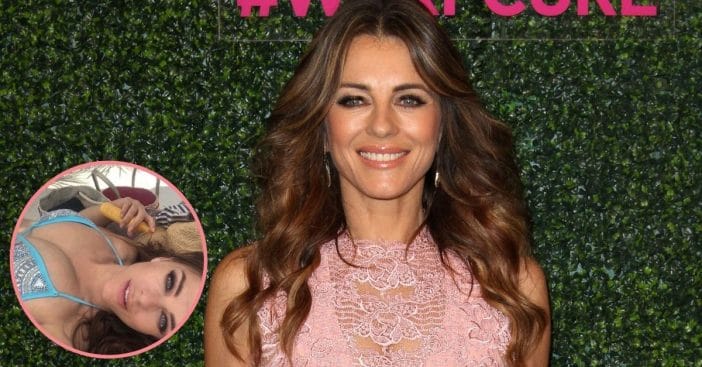 Elizabeth Hurley is opening up about the viral bikini photos she posted on Instagram during the coronavirus pandemic. The snaps went completely viral online while she was just isolating at home, and she says that the whole situation was “challenging.”

“Well, it was challenging because I didn’t leave the country for anywhere hot,” she tells People (the TV show!). “I filmed abroad, but I actually filmed in really cold countries. So all I had was my yard and my house, which is England. I didn’t have the beach, I didn’t have the sea, I don’t have any water. We very rarely have the sun.”

It was her son, Damian, who is also a model, who gave her the confidence to take the plunge. “He said, ‘Mom, just do it,’” Hurley remembers. “I’m like, ‘OK.’ But it’s good. I had him on task, especially during lockdown.”

The model is no stranger to posting racy and revealing photos online, whether during the pandemic or not. Earlier this year, Piers Morgan actually apologized to her for calling her “thirsty and creepy” after she shared a topless photo of herself – again, not something new for the model. In the photo, Hurley is wearing a black and white fluffy coat that partially covered her chest and a white bikini bottom.

Some people thought the photos were “creepy”

That photo, in particular, went viral and earned a lot of praise from her following, but there were a select few (including Morgan) who thought that her son Damian took the photo (hence why Morgan called her ‘creepy’ for the photo). “Far be it for me to suggest the tabloids get their facts muddled, but these pics were in fact taken by my 80 year old mother,” she writes online at the time. “Not entirely sure if that puts minds at rest or not.”

Hurley launched her own swimwear line named Elizabeth Hurley Beach in 2005. In May 2017, she told Closer Weekly that being a mom is what inspired her to launch the brand – she took a break for a bit to focus on motherhood, but found herself wanting to do something new professionally. “It allowed me to be more flexible with my time and work when Damian was at school,” she says launching her collection. “I love my life… I love change and I love new experiences.”