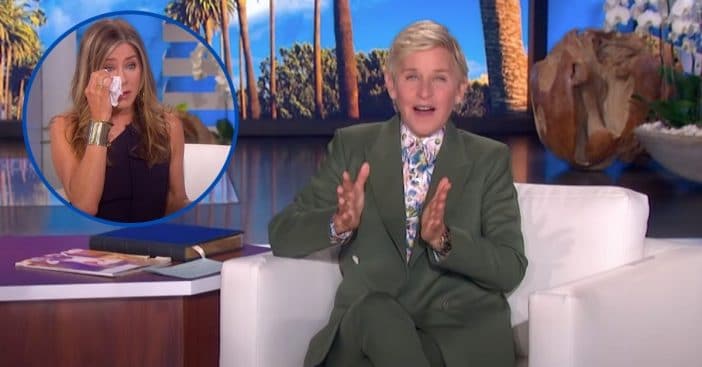 Jennifer Aniston was seen getting teary-eyed in a sneak peek video of Ellen DeGeneres’s show’s farewell season. In the scene, Aniston greets DeGeneres with a hug before she hands her guest a tissue. “What the hell? This isn’t supposed to be emotional. It’s not even over,” Aniston says as she dabs her eyes with the tissue.

“No, it’s not. It’s just starting,” DeGeneres replies, implying that Aniston is one of her very first guests for the season. “You know what, I haven’t been out in a long time, guys like maybe two years,” Aniston adds, wiping away a tear. “I’m almost not kidding. The last time I was in a sound stage doing a talk show was here.”

“I know you don’t go out much, so thank you for being here. I know you’re very careful,” DeGeneres replies, in which Aniston responds, “You’re very welcome.”

The last time Aniston was even involved in DeGeneres’s show was back in January 2020 when she guest-hosted the show before it was shut down and forced to work remotely due to the COVID-19 pandemic. In addition to Aniston, some other celebrities will also be seen on the final season of DeGeneres’s show, including Jimmy Kimmel, Kim Kardashian, Melissa McCarthy, Sean ‘Diddy’ Combs, Julianne Moore, and Melissa Etheridge.

The show was originally going to end after season 16

The final season of the show comes after a dramatic shakeup onset after several former employees claimed toxic workplace allegations. “I was going to stop after season 16. That was going to be my last season, and they wanted to sign for four more years and I said I’d sign maybe for one,” DeGeneres says about her show.

“They were saying there was no way to sign for one. We can’t do that with the affiliates and the stations need more of a commitment,” she adds. “So, we settled on three more years, and I knew that would be my last. That’s been the plan all along.”

Following the show’s cancellation, which will occur in 2022, The Kelly Clarkson Show will be filling in that time slot.