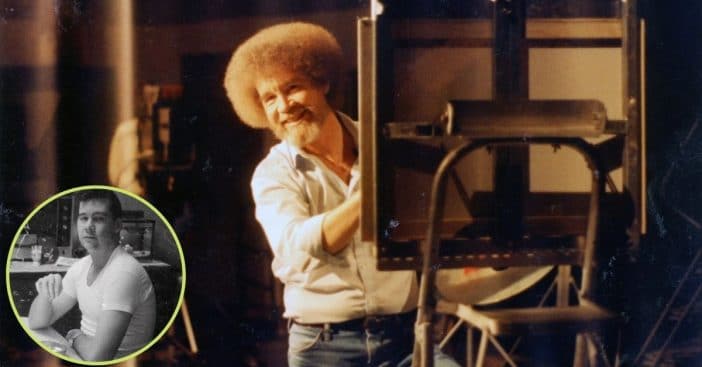 The iconic painter, the late Bob Ross, is completely unrecognizable in an old photo without his notable perm and beard. In order to promote the newest documentary Bob Ross: Happy Accidents, Betrayal & Greed, Netflix posted an older photo of the Joy of Painting star without his curly head of hair and beard.

“Seeing Bob Ross without his signature curls and beard is one of the most shocking moments in Bob Ross: Happy Accidents, Betrayal & Greed,” the streaming service captioned the photo in a tweet.

Seeing Bob Ross without his signature curls and beard is one of the most shocking moments in Bob Ross: Happy Accidents, Betrayal & Greed pic.twitter.com/7bCCsfy7C1

In the left-hand photo, it shows Bob exactly how we all know him – with his recognizable curly hair and beard. But the right-hand photo shows a much younger Bob before the iconic look. The iconic curly hair actually came about from financial reasons rather than as a fashion statement.

RELATED: Woman Who “Discovered” Bob Ross Said He Was A “Tyrant”

“He got this bright idea that he could save money on haircuts,” his business partner Annette Kowalski told NPR in 2016. “So he let his hair grow, he got a perm, and decided he would never need a haircut again.”

The documentary about Bob is currently available to stream on Netflix and is being praised by critics and fans alike. The streaming service says of the documentary, “Bob Ross brought joy to millions as the world’s most famous art instructor. But a battle for his business empire cast a shadow over his happy trees.”

Click for next Article
Previous article: Why Netflix Asked Adam Sandler To Rewrite His Movie So It’s Not Set In China
Next Post: ABBA Now Expected To Make ‘Historic Announcement’ Of New Music