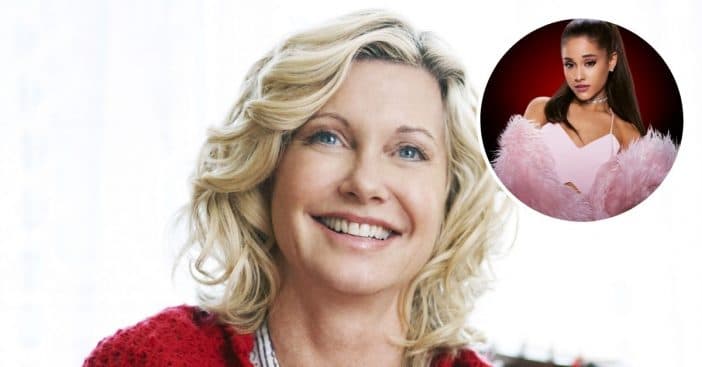 Ariana Grande is set to become a new coach on Season 21 of The Voice. The show released a teaser that showed coaches Kelly Clarkson, John Legend, and Blake Shelton sitting around a campfire. Ariana shows up as a “star” and starts singing Olivia Newton-John‘s classic song “Hopelessly Devoted To You.”

She sounded so good that Olivia herself sent Ariana a compliment! Olivia shared a clip of the video and wrote, “Wow! Love this rendition of Hopelessly Devoted To You [red heart emoji].”

The other coaches talked about Ariana replacing last season’s coach Nick Jonas. Blake joked, “I’m excited about Ariana joining the show because it’s somebody new for me to beat. I’m tired of beating John every season — and Nick.”

While John said, “Ariana is one of the most gifted artists in our business today. She is a huge, chart-topping artist with amazing vocal skills. I think so many of our fans out there truly love her, and I think she’s going to bring additional fans to the show, a different audience to the show, and I think it’s going to be great for all of us.”

The Voice returns on September 20, 2021, on NBC. Watch Ariana sing “Hopelessly Devoted To You” below: