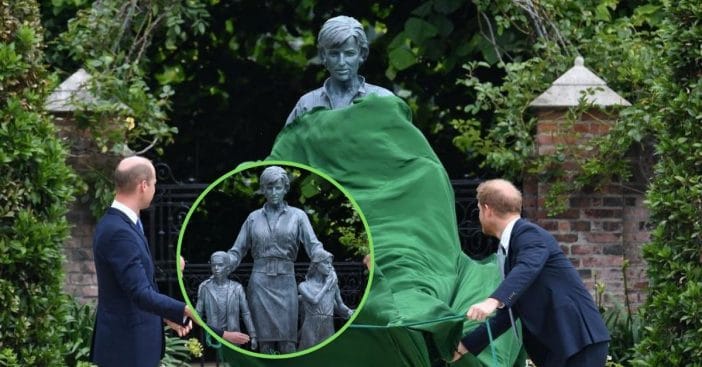 Prince William and Harry have come together recently to unveil a statue of their late mother, Princess Diana. The small event took place at Kensington Palace and they were joined by some of Diana’s closest family members. The event took place on what would have been Diana’s 60th birthday.

The representation of the statue showed Diana alongside three children standing at her side, and her arms reached out to two of them. Diana was often known as The People’s Princess, noting the relevance of the statue.

See the statue of Princess Diana below

Just beneath the statue, Diana’s name is engraved along with a line from the poem “The Measure of a Man,” which was also in the program in her 2007 memorial service. Following the unveiling of the statue, the two teamed up for a joint statement. They read, “Today, on what would have been our mother’s 60th birthday, we remember her love, strength and character—qualities that made her a force for good around the world, changing countless lives for the better.”

“Every day, we wish she were still with us, and our hope is that this statue will be seen forever as a symbol of her life and her legacy. They then added a note of gratitude to all of those who made the event possible.”

It was originally announced back in 2017, before we knew of a family feud

They continue, “Thank you to Ian Rank-Broadly, Pip Morrison and their teams for their outstanding work, to the friends and donors who helped make this happen, and to all those around the world who keep our mother’s memory alive.”

Even though a rift between the two brothers made headlines recently, the two showed no signs of tension or upset. The plans for this statue began long before any talk of a family feud. William and Harry actually announced the unveiling of a Diana statue back in 2017 in another joint statement.

The first photos of the commemorative statue of Princess Diana have been released. Princes William and shared their reactions to the touching tribute with sculptor Ian @RankBroadley and their late mother’s siblings, Lady Jane Fellowes, Lady Sarah McCorquodale and Charles Spender. pic.twitter.com/n3T5GfI5uC

“It has been twenty years since our mother’s death and the time is right to recognise her positive impact in the UK and around the world with a permanent statue,” the brothers said at the time.

“Our mother touched so many lives,” they continued. “We hope the statue will help all those who visit Kensington Palace to reflect on her life and her legacy.”

Click for next Article
Previous article: Elvis Presley Getting Own Streaming Channel Dedicated To The King Of Rock And Roll
Next Post: 48-Year-Old Woman Finally Welcomes Baby Into The World After 18 Miscarriages