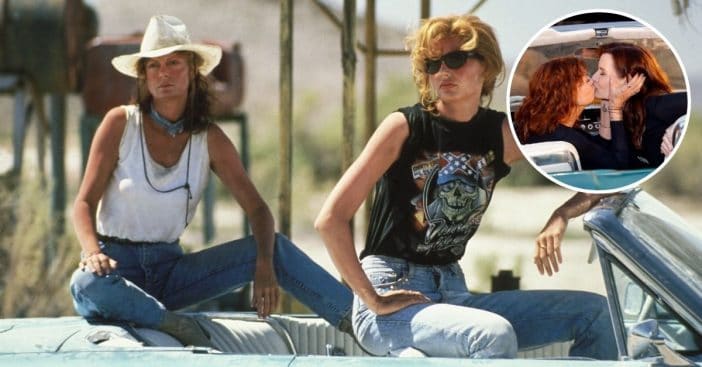 Thelma and Louise recently reunited! Stars Susan Sarandon and Geena Davis reunited to celebrate the 30th anniversary of Thelma & Louise. They celebrated at a charity event and brought the 1966 Ford Thunderbird from the movie.

The stars even wore special shirts for the occasion! Susan wore a shirt that read, “She’s My Thelma & I’m Her Louise” shirt while Geena’s shirt read, “I’m Her Thelma & She’s My Louise.” Susan and Geena, along with writer Callie Khouri shared some stories at a Q&A before the movie was played at a drive-in movie theater. They shared behind-the-scenes stories from working on the film.

Susan said, “It was really fun, especially in the desert. What I learned is that you do your best acting when you’re really just trying to drive a car and you’re not thinking about anything and getting the shots lined up. I was driving pretty fast by the time we finished the movie.”

RELATED: Susan Sarandon Was Surprised By Brad Pitt While Working With Him In ‘Thelma & Louise’

Last year, the women got together and revealed that the iconic kiss at the end of the film was actually impromptu! Susan shared, “It happened at the very end of the day. You know, the helicopter coming in, the police cars arriving, Harvey running, everything else, so it was basically like a stunt. We had one take. I just said to (director) Ridley (Scott) and to Geena, ‘You know, I’d really like to kiss you.’ And so, that’s what we did. One take, one juicy, romantic take.”

What’s your favorite scene from Thelma & Louise? Watch the ending below: