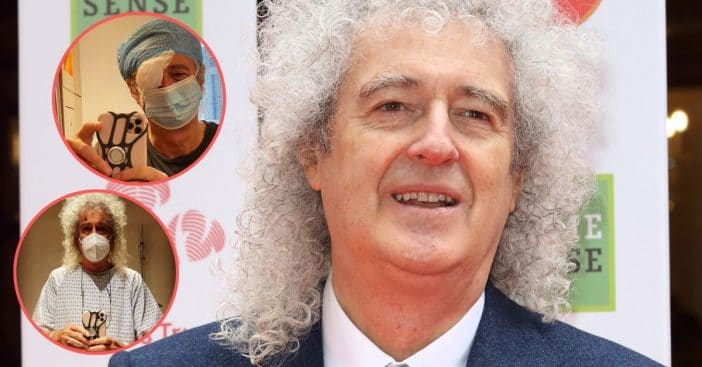 Queen guitarist Brian May has revealed that he has undergone some surgery on his left eye. He documented his experience in a series of posts to Instagram. “One Vision! All prepped and waiting … for a little bit of eye surgery… I’m in good hands. No need to worry. All in a day’s work … it should really improve my focus – AND my stereoscopic vision,” he captions a photo of him in a hospital gown.

May did not specify the reason for the surgery, but reports speculate that it might have just been a routine outpatient procedure. May followed up with a photo of himself with some gauze over his eye, appearing to still be in good spirits.

Brian May chronicles his eye surgery adventure on social media

“And …. all done !! I really didn’t feel a thing. It was all done with local anaesthetic and a tiny bit of sedation – So I was conscious throughout the whole thing – and fascinated by this amazing procedure. Only about 20 mins. The patch stays on until tomorrow morning,” he explains.

RELATED: Brian May Says If Queen Will Continue With 2021 Tour Or Not

This eye surgery is just another addition to the list of ailments for May. Back in May 2020, he was hospitalized after ripping his “Gluteus Maximus to shreds in a moment of over-enthusiastic gardening.” This was later discovered to be the result of a compressed sciatic nerve. And, it was around the same time that it was revealed he had suffered a heart attack. Reports also note that he “nearly lost [his] life” as the result of a stomach hemorrhage.
The Queen guitarist has been through quite a lot! Here’s hoping his eye recovers quickly.
Click for next Article