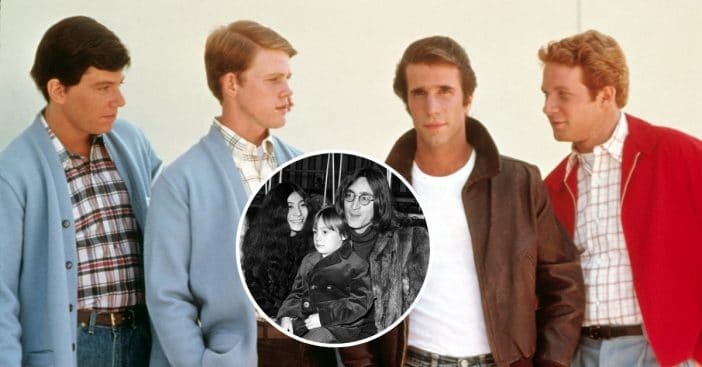 Henry Winkler opened up about how starstruck he was when John Lennon and his son, Julian came to visit the Happy Days set. The visit was during an early season. Julian was already a big fan of Happy Days, so his dad put together a visit with the cast.

Julian wasn’t the only one who was so excited about the visit! Henry said, “All of a sudden, John Lennon just came to visit. And he brought with him Julian. He was so, um, he was so shy. And I didn’t know how to get into a conversation with John Lennon. Then I just started talking about his Imagine the album that he made, the solo album.”

10 years later, Julian was on the Paramount lot once again and he visited Henry again! Ron Howard also spoke of the John Lennon visit. He said, “His son really wanted to see our set and meet Henry. Henry was desperate to meet John Lennon, too.”

He continued, “I had nothing but admiration for John Lennon but I was nothing quite as fervent – for Henry it was a practically religious experience. I just said hello – it was all over in 10 or 15 minutes. Ringo and Keith Moon wandered onto our set a few years later, but they were in a state in which I wouldn’t expect them to remember very much of the experience!”

Years later, Ron directed a documentary about the Beatles called The Beatles: Eight Days A Week – The Touring Years. Can you imagine the meeting of such iconic stars? It almost seems unbelievable that they would meet!

Click for next Article
Previous article: Priscilla Presley Gets Emotional In Photo Thanking Son For Mother’s Day Gift
Next Post: Extras In The Film ‘Jaws’ Recall Working For $2.50 An Hour