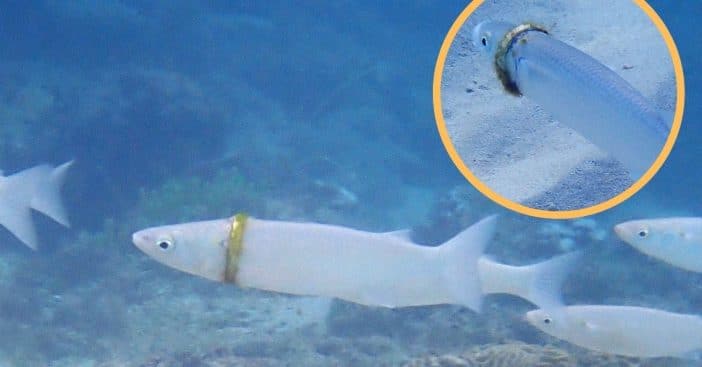 All sorts of items end up lost and misplaced miles from their home. That can include precious treasures like wedding bands, and on multiple occasions, they can end up in the ocean and on fish. A travel writer and enthusiastic snorkeler saw one such ring on a fish near Australia’s Norfolk Island.

The ring in question had belonged to a large local man who posted that he’d lost the accessory at the bay. The accessory joins other similar pieces of jewelry and many plastic food-related items that end up in the ocean, along its floor, and around its animals like fish.

A lost wedding ring ends up around a fish

The travel writer in question, Susan Prior, encountered a silver mullet fish of just a few inches in length. Around the fish’s body was a vibrant gold ring, captured in pictures the snorkeler took to record the finding.

“I recalled that someone had posted on our local community social media pages about a large man’s wedding ring that had gone missing in the bay earlier this year, so I decided to see if I could find the possible owner,” she shared. “It didn’t take long for my suspicion to be confirmed; we now have a poor mullet weighed down with someone’s (expensive) gold wedding ring.”

The problems weighing down on the ocean

In the past, Prior had seen other mullet fish with rings around them, though their bindings were made of different materials. She noted, “This one looked a shiny metallic gold, with a lot less algal growth compared to the plastic ones.” This is such a common occurrence, especially with this type of fish, because “Mullet snuffle through the sand looking for food, making it so easy for a ring or hair tie to flip over their noses and get stuck.”

She could not, at the time, catch up to the mullet fish to retrieve the ring, but worried about the impact of man-made materials on the fish’s environment and very bodies who can be “slowly strangled” and “the mullet has a life to live and it’s only fair he gets to live it.” Though plastic is less glamorous than a gold ring, Prior does implore people to be mindful and take small steps to make a big difference, adding, “It is such a quick job to [pry] the collar off the bottle and snip it before putting it in your waste.”