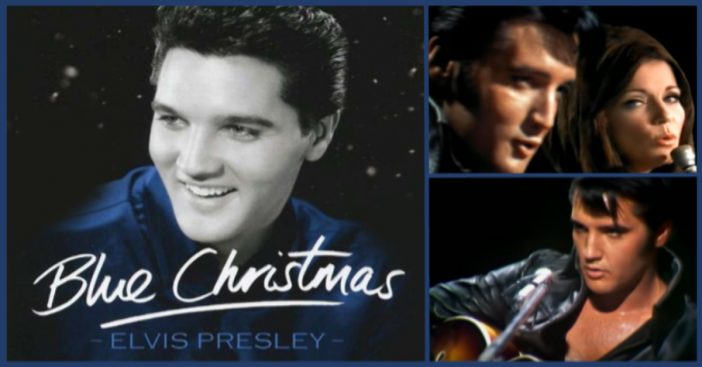 Originally recorded in 1950 by Ernest Tubb, Elvis Presley recorded this song in 1957 for his Elvis’ Christmas Album. It wasn’t released as a single until 1964, when in the US it was backed with “Wooden Heart” from Elvis’ soundtrack to his film G.I. Blues, but from 1965 and on, it was backed with “Santa Claus Is Back In Town.”

Elvis’ performed this song for the first time on his 1968 television special, which was called (Singer Presents) ‘Elvis’ (it was sponsored by Singer sewing machines). Recorded in June, the special aired on December 3 and helped revitalize his career.

His performance of “Blue Christmas” is the only video footage that exists of Elvis singing a Christmas song. Before he begins the song, Elvis states: “I’d like to do my favorite Christmas song of the ones I’ve recorded.”

I’ll have a blue Christmas without you
I’ll be so blue just thinking about you
Decorations of red on a green Christmas tree
Won’t be the same dear, if you’re not here with me

You’ll be doin’ all right, with your Christmas of white,
But I’ll have a blue, blue Christmas

Listen to the King by streaming, or purchasing, the hit on Amazon/Amazon Prime.