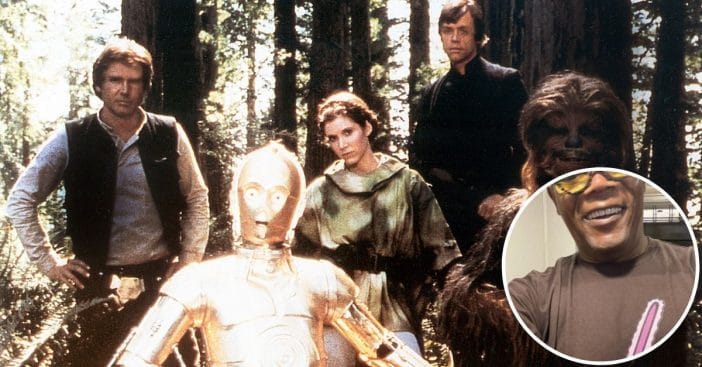 Yesterday was May 4th, which Star Wars fans have deemed “May the 4th Be With You” or “Star Wars Day.” Some of the Star Wars films’ biggest stars made sure to celebrate! Mark Hamill, Natalie Portman, Pedro Pascal, Billie Lourd, and Samuel L. Jackson all shared tributes on social media.

Mark (who played Luke Skywalker) shared a throwback movie poster and wrote, “I’m beginning to accept the fact that I’ll probably never do another movie that gets its own day.”

Samuel posted a selfie wearing a Star Wars T-shirt in honor of his character Mace Windu and simply said, “MAY THE 4th BE WITH YOU‼️‼️👊🏾”

Natalie shared a throwback photo of herself and Ahmed Best (voice of Jar Jar Binks). She wrote, “Throwback to the Blue Mountains with my forever friend @bestahmed — while shooting episode 2 in Sydney, 20 years ago! #maythefourthbewithyou” He commented, “Love you my sister.❤️❤️❤️❤️”

The Star Wars films and spin-off series are all available on Disney+. Disney recently dropped a new Star Wars series called The Bad Batch which followers experimental clones after the Clone Wars.