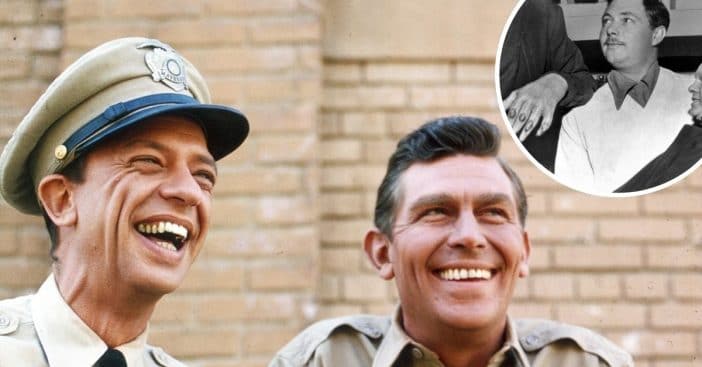 Lee Greenway and Andy Griffith became fast friends. Lee was the makeup artist on the set of The Andy Griffith Show. Turns out that Lee and Andy had a lot in common and by swapping stories, some of Lee’s real-life experiences inspired the show.

Lee grew up in a small town in North Carolina and could relate to the town of Mayberry, portrayed in the series. One particular story that inspired the writers was a time when Lee found a drunk relative trying to ride a cow!

Do you remember the episode called “The Rehabilitation of Otis” where Otis rides a cow while drunk? Turns out that was a true story. Lee said, “I had an uncle who got half lit-up or more once and came home on a mule. He went back out, put a saddle on a cow, and rode away. We got in the old T-Model and found him lying in the road with the cow standing over him.”

That’s crazy! Even after the show ended, Lee and Andy stayed friends for many years. Lee went on to become a very famed makeup artist working in movies. He was behind the makeup worn by James Arness in The Thing From Another World.

Can you believe some of the crazy stories on The Andy Griffith Show were inspired by real life?

Click for next Article
Previous article: Actress Linda Purl Actually Grew Up In Japan And Had Trouble Adjusting To American Life
Next Post: Demi Moore Shares Photo Of When Daughter Tallulah Shared Engagement News With Family