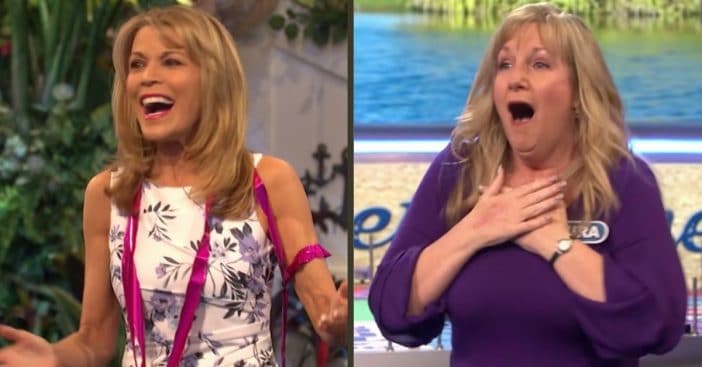 A Wheel of Fortune contestant won big and made history on the show by becoming the first contestant ever to win a house on the show. This prompted a confetti celebration that left Vanna White getting hit in the head with a ball of confetti. Laura Trammell is a sixth-grade teacher from Mission Viejo, California. She had already won $23,690 in prizes when she solved the puzzle during the bonus round.

As a result, she had won a space in the Latitude Margaritaville area of Daytona Beach, Florida, valued at $375,000. This brought her total to a whopping $398,690! “This is just nuts!” host Pat Sajak exclaims as the confetti was shot for the celebration.

When the show had returned after a commercial break, Sajak admitted to the viewers that Vanna’s eye had nearly been taken out by the ball of confetti. “First thing, I have to tell you that, when you won, Vanna was running across the stage, and the confetti came out, [she] got whacked in the head by a clump of confetti!” he says. “Thank goodness, it wasn’t my eye,” Vannas responds, to which Sajak says, “You could’ve put your eye out!”

Known for her job as a letter-turner on the show, Vanna happily walked away that night with no injuries. And even better, Trammell is understandably over the moon with her historic win! “I am beyond excited, I’m still in shock. I still can’t believe it just happened,” she says.