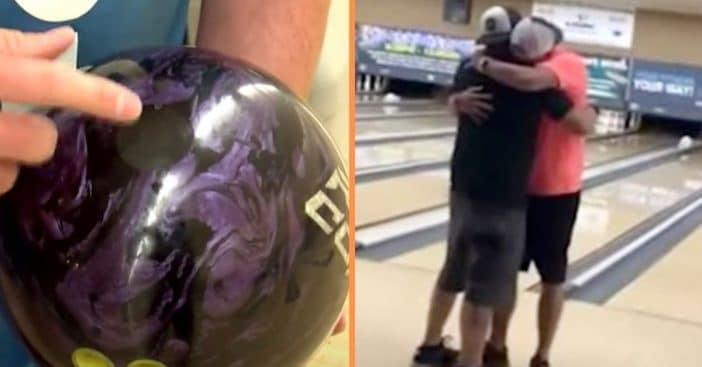 John Hinkle Jr. filled his bowling ball with his father John Hinkle Sr.’s ashes and then rolled a perfect game. John Jr. is a two-time NCAA bowling champion, and it’s clear that his father was able to provide him a lucky game from up in the sky after he passed away.

John Jr. made it a goal to use his custom bowling ball with the ashes and roll a perfect game as a tribute to his late father. “I was talking to my brother and told him, ‘I’m shooting a 300 with this ball,’ ” John Jr. tells WMBD-TV. “And Joe [his brother] said, ‘Do it!’ ”

“I had tears in my eyes in the 11th and 12th frames,” John Jr. said. “I couldn’t tell you where that last ball went, I had so many tears just throwing it.” While John Jr. confirms that he’s bowled several 300-point games in his career, this one, in particular, meant the most to him. This is because his dad introduced him and his brother to the sport, and actually never achieved a perfect score himself. He just wanted to make his dad proud.

Remembering a lifetime of bowling with the whole family

“It’s special. Dad shot 298, 299 — never had a 300. I had goosebumps, chills,” he says of his perfect game. “He was there.” His brother, Joe, also joked, “This makes up for so many nights growing up when we slept in a bowling alley while our parents were finishing league night.”

What an incredibly special and meaningful tribute to his late father – he would definitely be so proud!

Click for next Article
Previous article: New, Refreshing Menu Item Coming To Your Local Chick-Fil-A In Time For Summer
Next Post: ‘I Dream Of Jeannie’: The Honeymoon’s Over With NBC’s Fake Eden And Hagman Wedding