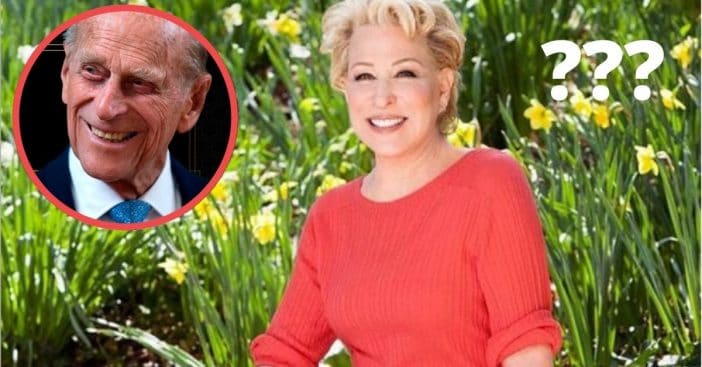 On the night that Prince Philip passed away, Bette Midler shared a tweet that had some Twitter users taken aback. She used the social media platform to mourn the royal’s passing while also making a surprising comparison.

In the singer’s view, he’s something of a rockstar. Indeed, he wasn’t just like any rockstar, but one of the most enduring the United Kingdom put out: the Beatles. Find out exactly what Midler had to say about Prince Philip and just how much peace and love followers are feeling at the statement.

To Bette Midler, Prince Philip was a rockstar

To me, #PrincePhilip was a Rock star. I only saw him once and they had to hold me back, kinda like when I heard #PaulMcCartney at the Garden…I lost it. And what a marriage. We know nothing of it except that it was long and loyal. Rest In Peace.

“To me, #PrincePhilip was a Rock star,” tweeted the First Wives Club actress. “I only saw him once and they had to hold me back, kinda like when I heard #PaulMcCartney at the Garden…I lost it.” She then spoke of his famously long and well-documented marriage to Queen Elizabeth II, adding, “And what a marriage. We know nothing of it except that it was long and loyal.”

As a young Brownie, I was at a ceremony to christen a park in our city and had a conversation with the Prince about my badges while my older sister, a Girl Guide, presented flowers to the queen. It was one very exciting day. I thought he was the most handsome man I'd ever seen.

Her tweet ends with “Rest In Peace.” Within 48 hours of being live, the tweet received 15,700 likes, over 750 shares, and almost 250 replies. A lot of those replies varied greatly in their tone. Some condemned any praise of the late prince and the institutions he’d been a part of. Others recalled their own memories seeing Prince Philip just as Midler had and the exciting day it caused. Others still had a different reaction, including one of perplexion.

Prince Philip was a Rock Star? what does that even mean 😂 we know exactly what that means https://t.co/v5hkSJ69zd

Skid row frontman Sebastian Bach also responded to her tweet with a ponderance of his own. “Prince Philip was a Rock Star? what does that even mean?” he replied. “We know exactly what that means.” Others then responded to his reply in turn, with one user wondering, “Bette got confused with the real ‘Prince’ maybe.”

However, another user fired back writing, “She means that when she saw him in person he inspired the awe that one experiences when seeing a real rock star. I do remember from your book that it bothers you when people refer to non rock stars as rock stars. I always think of you when I hear it.” One tweet caused much division and debate among multiple big-names’ followers. Where do you fall in the response to the prince’s passing?