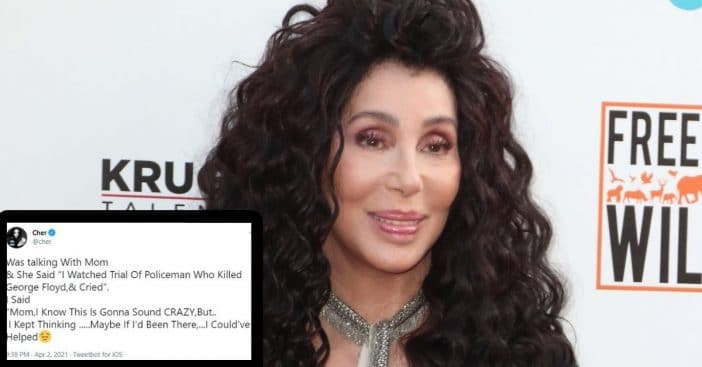 Cher has issued an apology following backlash she received for a tweet she made about George Floyd. Fans of the singer accused her of having a “white savior complex” after she tweeted that if she were there, she could have helped save him.

She promptly deleted the tweet following the backlash, and uploaded a few more messages to her fans regarding it. “Wrestled With This Twt, Because I Thought some ppl wouldn’t understand, Or Believe an Entertainer Could have Honest emotions about a human Being,suffering & Dying, even if It’s Only Shown On tv,” she writes. “You Don’t Know What I’ve Done,Who I Am,Or What I Believe.I CAN,I HAVE,& I WILL..HELP.”

Two hours later, Cher also followed up with an apology. “I Just got off phone With Friend Karen.Told her what Happened,& Realized,You Can Piss Ppl Off,& Hurt Them By Not Knowing Everything That’s’NOT Appropriate’To Say.”

She continues, “I know Ppl Apologize When They’re In a Jam,BUT🤚🏼TO GOD🙏🏼,IM TRULY SORRY If I Upset AnyOne In Blk Community. I Know My❤️”

I Just got off phone With Friend Karen.Told her what Happened,& Realized,You Can Piss Ppl Off,& Hurt Them By Not Knowing Everything That’s”NOT Appropriate”To Say.I know Ppl Apologize When They’re In a Jam,BUT🤚🏼TO GOD🙏🏼,IM TRULY SORRY If I Upset AnyOne In Blk Community.I Know My❤️

Another says, “You did upset. “I know my heart” is a way of deflecting. Just take accountability and do better.” However, there were fans who were on Cher’s side and understood her. “I don’t want to live in a world where people can’t express their empathy without having it twisted and throw back in their face. Cher’s race wouldn’t have stopped it. Her celebrity could have had an effect. Hard to say,” one person says.

A last fan adds, “It is unfortunate you have been forced to be attacked in this cancel culture. I/many understand what your thoughts were. If I was there, I would have screamed my head off, even if I was arrested To assume you had bad intentions saddens me. Which will lead to people not speaking.”

Click for next Article
Previous article: MLK’s Daughter Bernice Reflects On Losing Her Legendary Father
Next Post: Coinstar Reaches Out To Help Man Who Received Last Paycheck In Oily Pennies