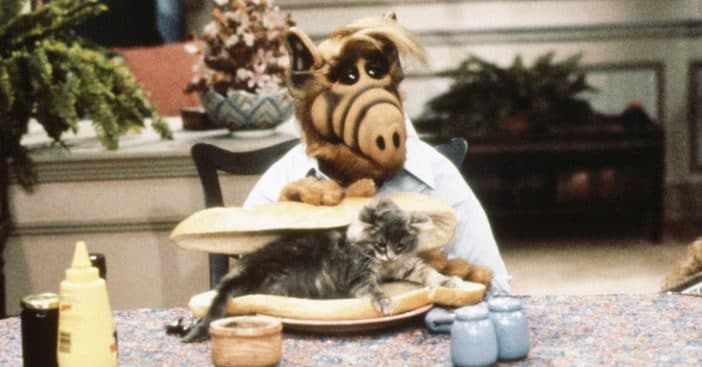 The hit show ALF followed an alien lifeform that crash-landed onto Earth by complete mistake, following a character of the same name. He ends up in the garage of a middle-class family called the Tanners. Instead of turning him over, they take him in and protect him from the Alien Task Force. ALF quickly became a lovable member of the family, but NBC execs weren’t too keen on the idea of him originally.

ALF had some pretty odd alien habits that could’ve been seen as crossing a line back in the ’80s, such as eating cats and drinking beer (even though drinking beer is seen as pretty normal, they didn’t want children to be subjected to this behavior.)

What could NBC execs and producers do about ALF and his influential behavior?

This was especially important because it was found that kids actually began imitating ALF’s behavior at a certain point. Mental Floss further states how execs were concerned ALF may be a bad influence on children watching at home. “Kids were duplicating what ALF was doing. It was kind of sad in a way,” says ALF co-creator Paul Fisco.

RELATED: Whatever Happened To Max Wright, Willie Tanner From ‘ALF’?

“Some kid put his cat in a microwave because ALF tried to do that once. We had to be real careful … in the pilot, ALF drinks a beer. He’s 200-something years old. We got flak about that,” Fusco recalls. “[They said] ‘he’s a role model. He can’t be drinking beer.’”

While his actions were never intended to influence children, it happened anyway. This is why, eventually, the cat-eating, beer-drinking alien lifeform was softened a bit to appear as more of a role model for children. It was difficult for creators to have to tread lightly with the character as he not only appealed to children but adults as well. There was a fine line of meeting the appeal of both age groups.

Click for next Article
Previous article: Here’s Why ‘Happy Days’ Actor Scott Baio Was Almost Kicked Off The Show
Next Post: How Did The Elephant Trunk Hairstyle Come To Define The 1950s?