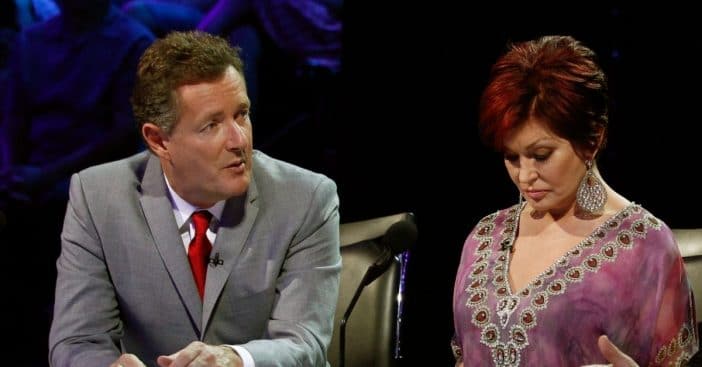 Piers Morgan is upset that his friend Sharon Osbourne is leaving The Talk. Sharon left the talk show after getting backlash for defending Piers and his comments against Meghan Markle and the bombshell Oprah Winfrey interview.

He believes that CBS is to blame for the entire issue. Piers tweeted, “What’s happened to ⁦@MrsSOsbourne⁩ is an absolute disgrace that shames CBS. Bullied out of her job for defending me against an invented slur of racism because I don’t believe a liar. In tomorrow’s Mail on Sunday, I’ll tell MY truth about this woke cancel culture bulls*t.”

On Friday, CBS confirmed that Sharon is leaving The Talk. The show has been on hiatus after the segment between Sharon and co-host Sheryl Underwood where they discussed Piers and his comments. The show will return on April 12, 2021.

Piers also wrote a column about the issue. He said, “What’s happened to Sharon and me in the past fortnight isn’t really about Ms. Markle. It’s about a far bigger issue than one delusional Duchess, and that’s everyone’s right to be free to express our honestly held opinions, forcefully and passionately if we feel like it.”

“But if our rights to free speech are denied, then democracy as we know it will die,” he added. “It’s time to cancel the cancel culture before it kills our culture.” Read his entire column here.

What do you think of this entire situation?