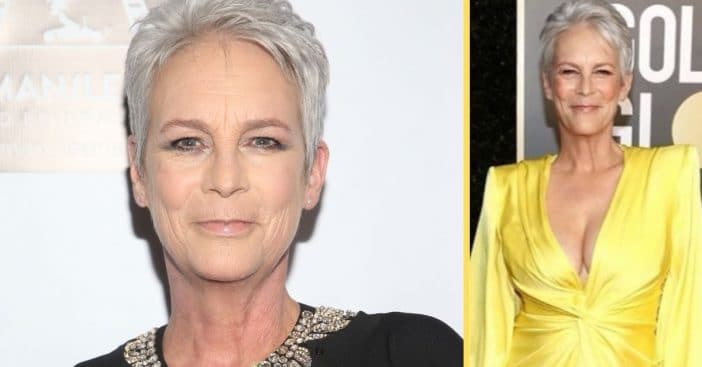 Jamie Lee Curtis made an appearance to present at the Golden Globes this past weekend, and her outfit was the talk of the town. The 62-year-old wore a yellow Alex Perry long-sleeved, floor-length dress, featuring a plunging neckline. “You slaying at the Golden Globes! Hand claps and finger snaps!!” one fan says of her outfit.

Another writes, “LOOKING GREAT JAMIE, NOT MUCH HAS CHANGED SINCE THE 80’S HAS IT?” Another adds, “Jamie Lee Curtis is a total YES #GoldenGlobes.”

Curtis took to social media to share her look with the world with a message: “What a thrill to salute front line workers and a talented group of actresses AND call out my friend, Jodie Foster as the WINNER for Best Supporting Actress for her work @themauritanian @goldenglobes,” she says.

“It takes a village to prepare me for public consumption @seanjameshair @jostrettell @jrossgirl @alexperryofficial @cathywaterman,” she adds. The 2021 Golden Globes was completely virtual last night as celebrities accepting awards tuned in virtually from home to accept their honors. Hosted by comedians and actresses Tina Fey and Amy Poehler, presenters for the awards were there physically to present the accolades even though the recipients were not there physically.

As for this year’s Golden Globes, reports say that viewership plummeted down 60% from last year. This year’s broadcast drew a measly 1.2 rating in the 18-49 demographic, which is down significantly from last year’s 4.7 rating. The reason behind the award show’s low ratings (aside from the ongoing pandemic) may include the controversy surrounding the Hollywood Foreign Press Association. An uproar occurred after a report surfaced noting the lack of diversity in the HFPA, which was also noted by show hosts Fey and Poehler during their opening monologue.