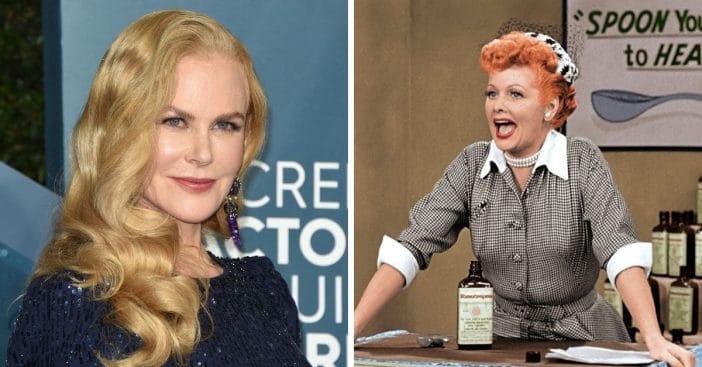 Nicole Kidman has been making headlines recently after news broke that she would be portraying the iconic Lucille Ball in a new film called Being the Ricardos. The film is written and will be directed by Aaron Sorkin, with Javier Bardem in talks to portray Desi Arnaz, Lucille’s husband.

Kidman opens up just after fans began weighing in on the casting decision, suggesting that actress Debra Messing would be a better fit. However, Lucille and Desi’s daughter, Lucie Arnaz, took to Facebook to tell fans that she’s happy with the decision.

“I was like, ‘Yeah, I would love to give it a go,’” Kidman says to Variety. “With Aaron’s words and his direction and Javier … that’s kind of a wonderful prospect to, you know. But yikes, off we go. Give it a go. Try my best—see if I can do it.”

Kidman continues, “I love Lucille, having looked now and delved into her. She’s an amazing woman. I’m very excited for people to see what Aaron found out about her and the way he’s interpreted Desi and Lucy and the way that it’s so rich. I didn’t know any of this.”

What Lucie Arnaz thinks of the news

“There seems to be a lot of discussion about ‘Nicole Kidman, it should be Debra Messing, it should be Carole Cook,’ I don’t know,” Lucie Arnaz says about Kidman and the controversy surrounding her. “Here’s the deal, what you should understand: We are not doing a remake of ‘I Love Lucy.’ No one has to impersonate Lucy Ricardo nor do the Vitameatavegamin routine or … any of the silly things.”

She adds, “It’s the story of Lucille Ball — my actual mother — not Lucy Ricardo and her husband Desi Arnaz, my dad — not Ricky Ricardo…  I hope I can set the record straight here and say stop arguing about ‘Who should play it? She doesn’t look like her? The nose isn’t the same, she isn’t as funny. Just trust us. It’s gonna be a nice film. And P.S.: The voting is over.”

Check out our deep dive into some behind-the-scene facts about LUCY!!!

Click for next Article
Previous article: Lynda Carter’s Tribute To Late Husband Robert A. Altman Has Everyone Mourning
Next Post: Shelley Duvall Found Out Who Dr. Phil Really Was “The Hard Way” After Divisive Interview