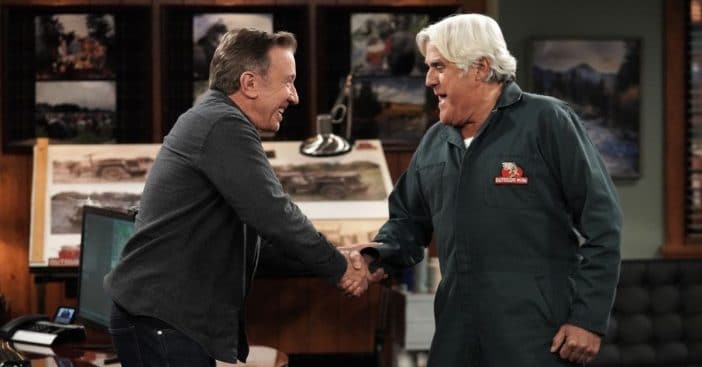 Tim Allen and Jay Leno were seen facing off and butting heads in a recent episode of Last Man Standing. Fox New’s shared an exclusive clip of Leno playing the role of an employee who works at Mike’s store, but they first met Leno’s character back in seasons 5 and 6.

This specific episode, “A Fool and his Money,” shows the two butting heads over some sort of ongoing situation that Mike is trending to mend. The episode also features Ed (Hector Elizondo) and Chuck (Jonathan Adams).

The show finally ended after its ninth season. Allen spoke to Fox News about the ending of the show, and he wasn’t exactly excited about it. He says that he’s so happy and proud of how long the show lasted on FOX, but is upset to see it go. He said that every day going on set was “horrible” knowing it was one day closer to the end of production.

The final episode aired on May 20, 2021 and was titled “Keep on Truckin'”!! Originally, this Tim Allen vessel premiered on ABC in 2011 but was canceled after six seasons in 2017. Then it was revived by Fox in 2018 which led to three more seasons, and a total of 194 episodes. Who was a fan of this one?

And, we remember some of Jay Leno’s BEST MOMENTS… remember the Headlines!!??

Click for next Article
Previous article: Lisa Marie Presley With Her 3 Daughters In 53rd Birthday Post
Next Post: Alan Alda Shares ‘M*A*S*H’ Throwback And Has A Message For Fans About COVID-19