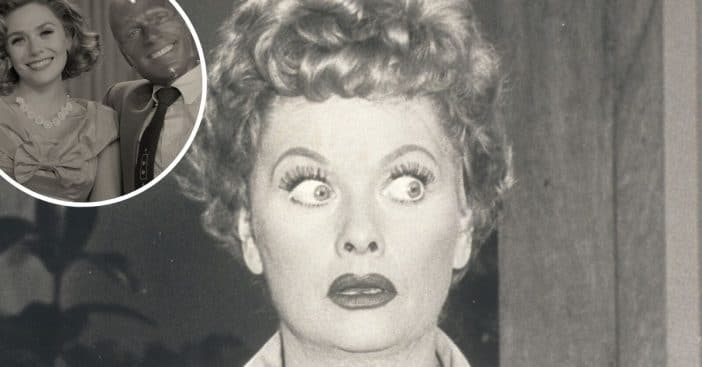 WandaVision is a new Marvel series that recently debuted on Disney+. According to IMDb, the show “blends the style of classic sitcoms with the MCU in which Wanda Maximoff and Vision -two super-powered beings living their ideal suburban lives-begin to suspect that everything is not as it seems.”

Elizabeth Olsen, who plays Wanda, said she was inspired by three leading ladies for the role. They include Lucille Ball, Mary Tyler Moore, and Elizabeth Montgomery. If you watch, you can definitely see that the show took inspiration from classic sitcoms including I Love Lucy. In particular, the show used physical comedy, like many sitcoms from decades ago.

Is the Disney+ show ‘WandaVision’ inspired by ‘I Love Lucy?’

The director, Matt Shakman said, “When we were in our period sitcoms, when something shifted from a ‘Dick Van Dyke’ or ‘I Love Lucy’ style into something that was outside of that and going into a ‘Twilight Zone’ space, we talked about the period shows that addressed the odd and the strange, and how we could embrace that. That’s a little bit about how we approached the shooting of it and the look of it.”

RELATED: This Famous Actress Is Now Set To Star In ‘I Love Lucy’ Movie

The show was also shot in front of a live studio audience, just like I Love Lucy. He continued, “You can feel the energy of that theatrical performance working with the audience, like with Lucille Ball and ‘I Love Lucy’ or ‘Dick Van Dyke.’ And then, when you get into ‘60s shows, like ‘Bewitched’ or ‘I Dream of Jeannie,’ it is a fourth wall and, all of a sudden, it’s much more like doing a movie. That laugh track is all canned and brought in, and it changes the energy, the approach, the style, and everything.”

In conclusion, watch the trailer for WandaVision below: