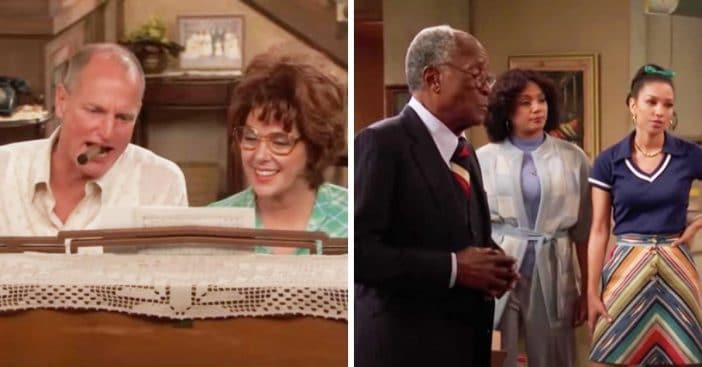 In December 2019, fans of nostalgia were treated to some live entertainment in the form of reviving old shows with new faces. ABC would air an installment of Live in Front of a Studio Audience, featuring the shows All in the Family and Good Times. Bernard Vyzga, designer of the set, opens up in a new exclusive interview with Pop Culture about his set design. He reveals that not everything was a “painstaking recreation.”

Vyzga has worked in TV since the ’80s on Who’s the Boss and Married… with Children. He has also been involved with popular shows One Day at a Time and Last Man Standing. Vyzga revealed that regarding retro-sitcom sets, a lot of it actually had to be completely made from scratch. “Very little of the existing sets or props were in storage,” he says. “In fact, we recreated specifically the All in the Family chairs, Archie and Edith’s chairs. The originals are in the Smithsonian.”

The production designer continues, “Part of the concept when we started Live one and continuing to Live two, we talked about not matching the sets exactly, but capturing the spirit of them. So we researched and we have some drawings from All in the Family. We found some drawings from Good Times, but we weren’t looking for exact replicas of everything but trying to get a sense of recreating the set with the spirit of the original.”

RELATED: Life And Death Of Jean Stapleton, Celebrated ‘All In The Family’ Star Known As Edith Bunker

Vyzga does point out that while the scripts for the shows were still relevant in today’s times, the show’s set design wasn’t up to par. “I think the difference for the production designer [and] art department is that 40 years later, camera and broadcast technology is so different,” he explains. “We went from 3X4 and full videotape cameras to sophisticated 4K cameras and 16X9. The lighting is different so that you just have to pay a little more attention to detail and textures.”

Vyzga’s work has earned him an Emmy nomination for Outstanding Production Design for a Variety Special in 2019. Do you remember watching Live in Front of a Studio Audience last December?