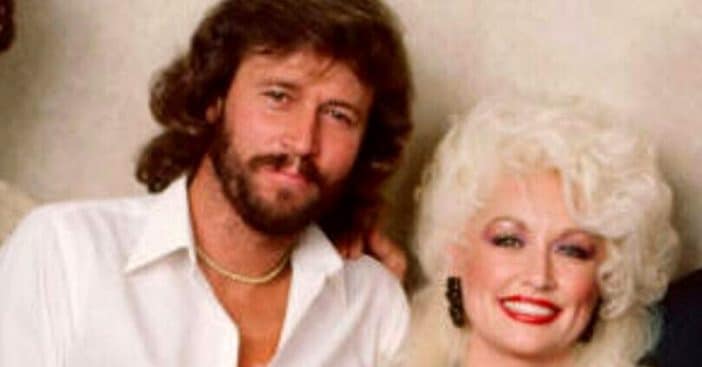 Dolly Parton and Barry Gibb are now both 74 years old and still creating lots of music. They recently came together to reprise a Bee Gees classic. Barry has just released a new album called Greenfields: The Gibb Brothers’ Songbook Vol. 1.

He wanted to do an album and work with artists that he admires the most. These artists include Dolly, Keith Urban, Little Big Town, Miranda Lambert, Olivia Newton-John, Sheryl Crow, Jason Isbell, Brandi Carlile, Alison Krauss, Gillian Welch, and more. What an incredible lineup!

On the album, Dolly and Barry sing “Words.” Both artists shared the song on Twitter and how excited they were to sing together. The two have been friends for decades. Barry wrote, “Happy New Year everyone! So excited to share #words with you all. @DollyParton and I had so much fun singing this song together from my new album #greenfields. The album is available everywhere January 8th. I hope you enjoy it as well. It’s out today on #youtube #spotify #apple”

I was honored when my dear friend @GibbBarry asked me to join him for a special version of “Words” on his new album! Listen to our version of the @BeeGees classic now ❤️ https://t.co/X84InmvOhp pic.twitter.com/e3W8ysAXlo

Dolly shared the same clip and wrote, “I was honored when my dear friend @GibbBarry asked me to join him for a special version of “Words” on his new album! Listen to our version of the @BeeGees classic now ❤️ https://barrygibb.lnk.to/WordsVisualizer”

Barry is the only living member of Bee Gees left. His bandmates and brothers, Robin and Maurice have both passed away. Barry is doing a great job keeping their legacy going and giving the songs a new twist with help from these other artists.